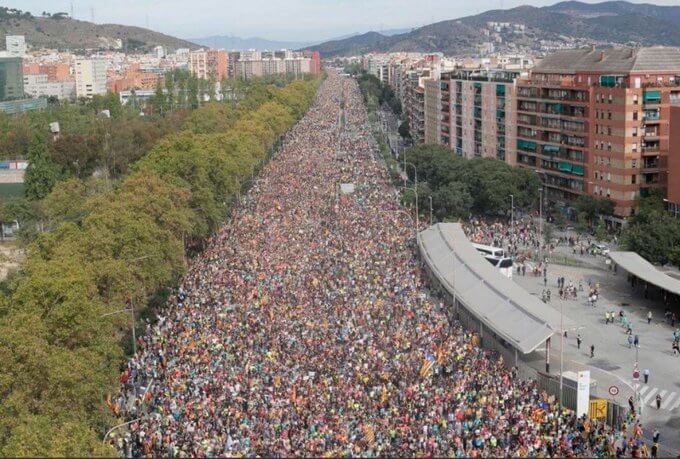 With a general strike having taken place in Catalonia on Friday  – and the day also ending with three days of five Marches for Freedom across Catalonia stretching over 100km, all converging in Barcelona and blocking major highways and roads along the route – the city centre erupted yet again with clashes between police and protestors.

In the afternoon, 525,000 people flooded the Passeig de Gràcia boulevard in Barcelona city centre, according to the local Guardia Urbana police. It was the culmination of the five marches from around Catalonia.

Pro-independence politicians celebrated the turnout, with Catalan president Quim Torra thanking all those who participated in it.

‘Congratulations to the ‘Marches for Freedom’ that have filled the country! Thank you very much to all of you who have demonstrated the independence movement’s civic and peaceful force. We will win and keep on going, always keep on going,’ Torra tweeted.

The Catalan Parliament speaker Roger Torrent also commented on the marches on Twitter.

‘The citizenry has said that no matter how much prison and repression they impose, democracy cannot be condemned. Today, as on October 3 [during the 2017 general strike], we will go out en masse and peacefully to defend our rights and freedoms.

Around 6 pm, however, on the Via Laietana avenue in central Barcelona, clashes began between police and protestors setting barricades on fire.

Clashes between pro-independence supporters and police officers also erupted in Girona and Tarragona.

The Via Laietana in Barcelona became the focal point of clashes between police and protestors, with the police officers guarding the headquarters of the Spanish National Police in the street. Police reportedly shot tear gas against demonstrators. As protestors sat in the street, police charged – with videos of the event being widely shared on social media.

It was reported that Spanish police also shot rubber bullets and charged against a group of journalists.

On Twitter, Amnesty denounced the ‘excessive use of force’ by police officers in Catalonia against ‘people who didn’t pose any risk, including journalists’.

At least 10 people have been arrested so far, following the clashes.

Spain’s interior minister Fernando Grande-Marlaska warned that the Spanish government would use the criminal code ‘forcefully’ against the independence movement’s ‘violent’ factions.

At around 10.30pm on Friday night police charged at high speed in riot vans at a large group of gathered demonstrators at Plaça Catalunya to disperse the crowd.

At 11pm La Rambla in the centre of Barcelona, fires and dozens of riot vans surrounded the area as clashes with demonstrators continued.

Latest reports are that Spanish police officers have arrested an El País newspaper photojournalist, Albert Garcia, and dragged him into custody, hand-cuffed.

Photojournalist Garcia was arrested in Barcelona’s Urquinaona square whilst taking pictures of a detention carried out by Spanish police officers. Witnesses have questioned police accusations that he hit an officer.

This report is currently being updated.

Torra calls for ‘immediate meeting’ with Sánchez to engage in dialogue