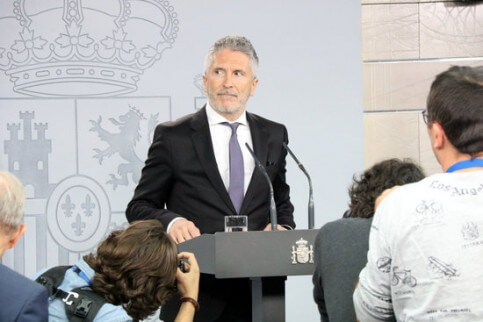 Fernando Grande-Marlaska, the Spanish interior minister, has said that the recent protests in Barcelona and other Catalan cities and towns are ‘affecting Catalonia’s international reputation’.

He did, however, praise the work of police in limiting the impact of the protests on Thursday night, involving far-right and anti-fascist groups, saying that ”confrontations were scarce due to the work of the police’.

Marlaska reassured that police will continue to detain people involved in the altercations, which kicked off on Monday following the sentencing of 9 Catalan leaders over the 2017 independence bid. ‘We have already arrested a high number of people, and we will continue to arrest more,’ he said.

The Spanish minister defended police amid growing criticism over officers’ in the crackdown of protestors, with nearly 400 people injured following clashes and the use of rubber bullets: ‘Officers are acting very professionally and are acting as they should in a democratic state: guaranteeing the rights of all citizens.’

Over 200 police officers have reportedly been injured in last days’ altercations in Barcelona and other major towns in Catalonia.

In spite of the disruptions, and mass protests set to congregate on Friday afternoon, Marlaska stressed that the Spanish government has ‘reiterated to embassies that they can visit Barcelona as normal’.

Meanwhile, with sectors of the Catalan pro-independence movement calling for him to resign, Catalonia’s interior minister, Miquel Buch, has said that his department and the police ‘will not tolerate violent groups affecting the coexistence among Catalans’.

The Catalan National Assembly (ANC) has called for Buch to be removed from his post over the ‘disproportionate’ conduct of the Mossos d’Esquadra police during the protests seen since independence leaders were sentenced to prison on Monday.

However on Friday, Buch called the incidents of aggression seen on the streets in recent nights ‘intolerable’, and said the objective of the Mossos was to ‘guarantee the right to demonstrate and to pursue against violent attitudes’.

Acknowledging that people on both sides had suffered beatings during a clash between anti-fascists and far-right extremists on Thursday night, Buch added that ‘the police prevented large clashes between far-right groups and violent protesters’.

The Catalan interior minister also dismissed suggestions that there was any sympathy for violent groups within the Catalan police, after some footage showed an officer shaking hands with a far-right protestor.

Buch also insisted that violent protestors had nothing to do with the Catalan independence movement, which he described as ‘civic’ and ‘peaceful’ and which he said is ‘reflected in the Marches for Freedom‘ currently making their way to Barcelona.