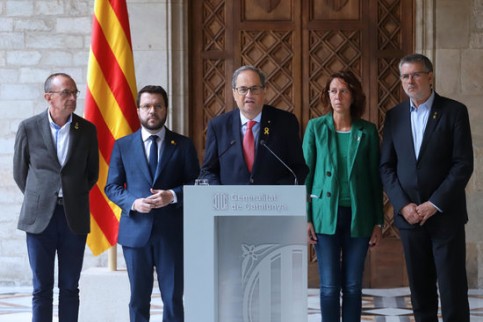 Quim Torra, the Catalan president, has called on Spain’s acting prime minister, Pedro Sánchez, for an ‘immediate meeting’ in order to engage in dialogue and find a way out of the current Catalan crisis.

‘We urge the Spanish government to set a date and time in order to talk, negotiate and reach an agreement,’ said Torra. ‘This is their responsibility and obligation, we have been asking to talk for a long time.’ For him, this is ‘more urgent than ever’ now.

In the early afternoon, the Catalan leader phoned Spain’s prime minister to engage in talks but the response from Madrid after a 20-minute wait was that Pedro Sánchez could not ‘pick up the phone’ and would be able to talk sometime later, according to government sources talking to the Catalan News Agency.

An hour later, Spain’s government sources said that Catalonia’s leader needs to ‘categorically condemn violence’ before Pedro Sánchez engages in dialogue. ‘First of all, [complying with] the law, and then dialogue,’ they said.

During his statement, joined by the Catalan vice president and mayors of Girona, Lleida and Tarragona, Torra made clear that protestors should rally ‘peacefully and civically’.

‘No sort of violence represents us,’ he said in a statement, not joined by Barcelona’s mayor, Ada Colau, who earlier in the day also rejected the riots.

‘This cannot, cannot go on, Barcelona doesn’t deserve it,’ she said. ‘Barcelona is everyone’s and we need to take care of it.’

Meanwhile, right-wing unionist parties blamed the Catalan president and the independence movement for the riots, but also accused Spain’s leader of inaction.

Ciudadanos (Cs) leader in Catalonia, Lorena Roldán, said Torra is the ‘instigator’ of the riots. ‘He neither condemns firmly violence, nor distances himself of the road blocks.’