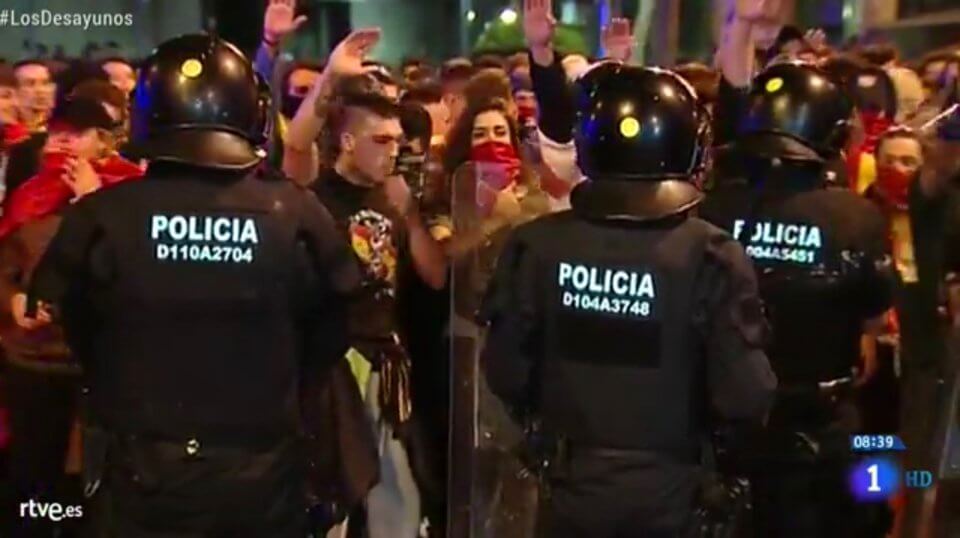 A fourth night of protests and disturbances in Barcelona on Thursday saw riot police attempting to prevent a clash between anti-fascist and far-right extremist demonstrators.

Two demonstrations came together in the city’s Sarrià neighborhood, in Plaça Artós square, where the Mossos d’Esquadra Catalan police charged a group of far-right extremists.

Despite police setting up a cordon to keep the groups of a few hundred people apart, they were unable to prevent some violent incidents between the two sets of demonstrators.

A far-right organisation had called the demonstration to start at 8pm, although many of the demonstrators arrived before that time, armed with flares and rockets.

The protestors made fascist salutes and chanted in favour of Franco and Hitler, while other chants were against the Catalan pro-independence camp and acting Spanish prime minister, Pedro Sánchez.

The opposing demonstration ‘to combat fascism’ was organised by a number of anti-fascist groups as a response to the protest called by the far-right group.

The presence of the anti-fascist protestors drew chants from the far-right demonstrators, who cried ‘This is our land and we’ll defend it,’ and sang the Falangist anthem, ‘Cara al sol.’

Later on Thursday night, the Catalan interior department admitted that it had not been able to send enough officers to properly police the two opposing demonstrations and ensure they did not coincide.

The most serious incidents between the two groups came after the demonstrations had broken up, and the protestors began moving towards the city centre.

One anti-fascist demonstrator was savagely beaten by a group of far-right extremists that was caught on video, which parliament speaker, Roger Torrent, publicly condemned.

Meanwhile, the unrest seen in Barcelona and other Catalan cities continued for another night on Thursday, with the Mossos d’Esquadra police making at least a dozen arrests.

Thursday night also saw protestors break into local businesses, such as a branch of CaixaBank, from which they took chairs and desks for barricades, and a clothes store.

In Tarragona, the day after a protestor was run over, police used the ‘carrusel’ technique against protestors, which consist of driving vehicles at fast speeds to disperse groups.