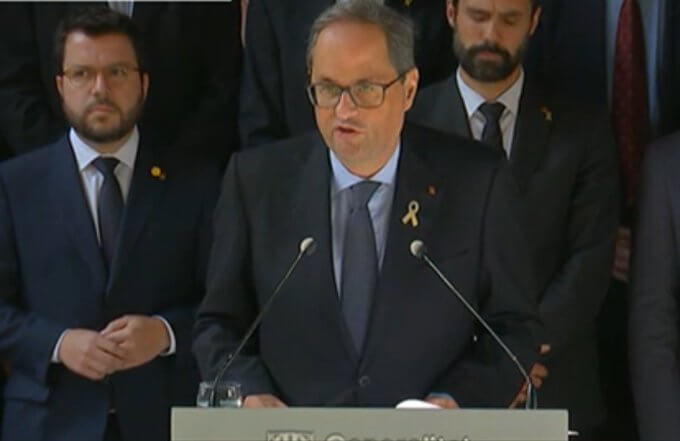 ‘This is an act of vengeance and not justice.’ This is how the Catalan president, Quim Torra, described the verdict on the nine 2017 referendum leaders, who have been found guilty of sedition, and given sentences of up to 13 years behind bars.

Some two hours after the judges’ announced the verdict on Monday, Torra made a statement outside the Catalan government headquarters alongside his ministers, and former top officials.

Torra dismissed the verdict as ‘anti-democratic’ and a ‘general cause against the right to self-determination and independence.’

The Catalan president also pointed out that Spain has endorsed international treaties granting territories the right to self-determination, and he added that the Spanish criminal code does not mention holding a referendum as a crime.

‘The verdicts announced apply to millions of Catalans,’ Torra said, stating that he would chair an extraordinary Catalan cabinet meeting tomorrow morning.

He has also asked Catalan Parliament speaker Roger Torrent to make a speech in the camber and will send letters to the king and to Spain’s acting prime minister, Pedro Sánchez, to ask for a meeting.

‘Injustice has been served’ – Catalan leaders react to prison sentences