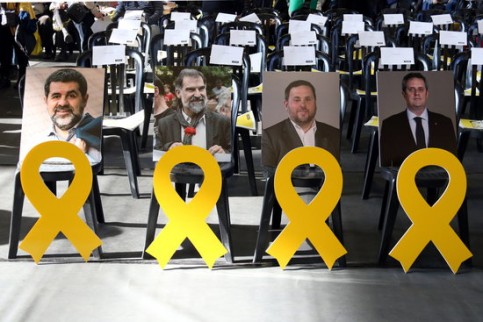 After the Spanish Supreme Court announced the verdict in the 2017 Catalan referendum trial on Monday, sentencing nine pro-independence leaders to prison for terms of 9 to 13 years for sedition and misuse of public funds, the leaders themselves began to give their reactions.

Catalan vice president during the independence bid in 2017, Oriol Junqueras, who received the longest sentence of 13 years in prison, pledged to ‘come back stronger, firmer and more committed than ever’, and he urged everyone to ‘keep going, because we always will’.

The parliament speaker at the time of the bid, Carme Forcadell, also reacted to her sentence of 11 and a half years for allowing votes on independence in the chamber, saying: ‘Injustice has been served. Free parliamentary debate is not a crime,’ she wrote on Twitter.

As for the former territory minister, Josep Rull, who was sentenced to 10 and a half years in prison, he said: ‘If they had judged the events, we would have been acquitted. As they have put our ideas on trial, they have convicted us.’

The former interior minister, Joaquim Forn, received a jail term of 10 and a half years for sedition and thanked people for their backing: ‘Thanks for your support. We’re grateful because we know you’re always there. We won’t give up,’ he said.

One of the pro-independence activist leaders on trial, Jordi Cuixart, was defiant on finding out that he had been sentenced to 9 years in jail: ‘The response to the sentence, do it again. We will do it again. Amnesty, democracy and self-determination.’

The other convicted activist leader, who has since turned politician, Jordi Sànchez, reacted to his 9-year prison sentence with a single word: ‘Injustice,’ adding that ‘9 years in jail won’t defeat my optimism. Catalonia will be independent if we persist.’

Former minister, Jordi Turull, also remained defiant in the face of his 12-year sentence in jail, reacting to the verdict on Twitter with a rallying cry: ‘Long live free Catalonia.’

Former minister Carles Mundó, who was convicted but not jailed in the case, has expressed his sadness on this historic day for Cataonia: ‘I’m in shock over the severity of the sentences. This verdict is a big mistake that will weigh heavily on Spain’s history.’