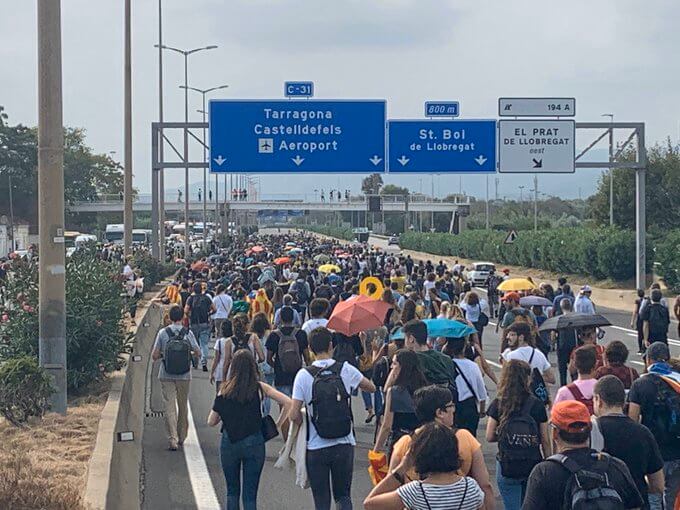 Barcelona El Prat airport has become flooded with thousands of pro-independence protestors on Monday afternoon, who have also tried to block major infrastructure across Catalonia in response to lengthy prison sentences for sedition handed to nine politicians.

Some reports suggest over 8,000 protestors are now at Barcelona airport.

At least 20 flights have already been cancelled to destinations such as Madrid, Santander, Menorca, Ibiza, and Paris, among other cities, whilst several others were delayed.

Hundreds of police officers were deployed to guard the facilities and ensure that most passengers could take their flights.

Police have resorted to using their batons to charge some protestors, and even beat a French journalist.

The protest was announced early in the afternoon by Tsunami Democràtic, the group created ad hoc to coordinate the response to the Supreme Court verdict for the politicians and activists who led the 2017 independence push.

‘There are already thousands of us and we’re being seen all around the world. But there needs to be more of us. Many more,’ tweeted Tsunami Democràtic. ‘We need to stop all activity so the world can see this injustice.’

At 6:30 pm, Tsunami Democràtic announced the next action: blocking the Barajas airport in Madrid. According to the group, 1,200 cars blocked the roads leading to the airport.

Several protests began across Catalonia only minutes after Spain’s Supreme Court revealed the verdict on the 2017 referendum leaders on Monday morning.

At 1 pm, the Tsunami Democràtic group called on pro-independence activists to block Barcelona El Prat airport to ‘show Europe and the world the rejection of the sentence’.

A matter of minutes later private vehicle access to El-Prat’s Terminal 1 was already jammed with cars, which made it difficult for police vans to reach the site.

Within an hour, routes to the airport by public transport including train and underground were suspended – but this did not prevent hundreds of people from reaching the infrastructure. Some people have even started to walk to the airport.

Some of them managed to access its main hall of departures, while others were only able to reach the entrance. Police officers prevented protesters from accessing the main hall – yet the demonstrators remained peaceful, as requested by Tsunami Democràtic through a Telegram Group followed by over 165,000 people.

Some sources have have reported that hundreds of people – both campaigners and passengers – were trapped in the airport’s underground stations and not allowed to access the site. The same sources claim that the police charged people to prevent them from leaving the underground.

Meanwhile, demonstrations across the country were also held on Monday, ending up in several streets, roads and highways cut off – the high-speed train between Barcelona and the French border was also interrupted for protesters in the rails.

Earlier in the day, several key avenues in Barcelona, such as Gran Via, Diagonal and Via Laietana, were cut off, with spontaneous marches also springing up in the city.

Dozens of public servants, for instance, rallied outside the territory ministry in support of the convicted politicians and activists, especially former territory minister Josep Rull.

At 11am, the blocks affected C-31 highway in the northernmost part of the country, at Verges. Other main roads were also cut off, including C-66 in La Bisbal d’Empordà, C-17 in Vic.