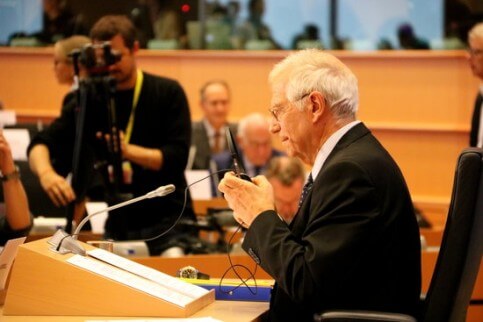 Spain’s Foreign Minister Josep Borrell has received the greenlight from the European Parliament to become the EU’s High Representative for Foreign Affairs.

With the only opposition coming from the far-right groups, the socialist politician will succeed Federica Mogherini as the EU’s diplomacy head from 1 November.

This comes after Borrell faced a 3-hour hearing in which MEPs quizzed him over his policy plans.

The current Spanish foreign minister is a staunch opponent of independence, which has led to several clashes with the Catalan administration, including a legal battle he launched against Catalan offices abroad.

A tense interview with Deutsche Welle and comments on the genocide of Native Americans are some of the other controversies in which he has been recently involved.

Josep Borrell tiptoed around the Catalan issue in the hearing on Monday.

‘Considering the post I aspire to, I’m not going to comment on a country’s internal affairs, including mine,’ said Borrell, who faced MEPs’ questions in Brussels on Monday afternoon.

A former president of the EU Parliament from 2005 to 2007, and a social democratic heavyweight, Borrell’s candidacy is seen as an attempt by Spain’s acting prime minister, Pedro Sánchez, to gain influence in the new European Commission.

Motion of no confidence against Catalan president fails

More Spanish police being moved to Catalonia ahead of trial verdict