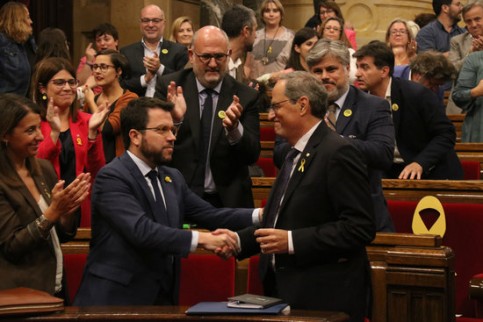 The motion of no confidence against the Catalan president, Quim Torra,  failed on Monday after a five hour debate in the Catalan Parliament.

The Ciudadanos (Cs) party’s bid to oust Quim Torra from his post and get their leader Lorena Roldán to replace him only got the support of the People’s Party (PP) in Catalonia.

With 40 votes in favour of the motion, 76 against and 17 abstentions, Torra will continue as president – the term officially ends in December 2021 if no snap election is called.

Meanwhile, most of the parties in the chamber rejected her bid calling it ‘opportunist‘, taking into account that the snap Spanish election will be held on 10 November.

The Catalan Socialists (PSC) have also criticised the Cs party motion, but ended up abstaining during the vote – so Roldán did not get the support of the whole unionist camp. All the Catalan pro-referendum parties voted No, including Catalunya en Comú, not explicitly in favour of independence.