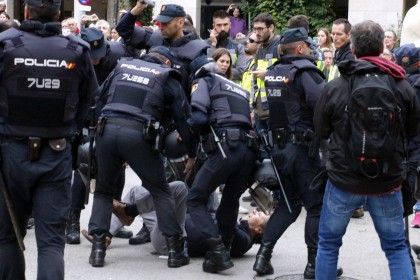 Spain’s Interior Minister has ordered more Spanish National Police and Guardia Civil officers to Catalonia, as preparations for the verdict of the Catalan Trial begin.

A verdict is expected either towards the end of this week or early next week. If the provisional police response is anything to go by, with the outcome of the verdict – particularly if the leaders are found guilty – Catalonia will once again be rife with protests.

According to National Police sources, so far 500 officers have been transferred to Catalonia from riot police units in Zaragoza, Valencia and Madrid, among other cities.

Another group of officers arrived on Tuesday morning, and a gradual increase is expected to continue in time for whenever the verdict is released.

Sources of the Spanish Interior Minister have said that bolstering the police force in the area is being coordinated with Catalonia’s own police force, the Mossos d’Esquadra, and that it is normal protocol ahead of expected protests, and underline that the forces have been sent to ensure the provisional safety of the protests.

The officers are believed to be staying in hotels on the Catalan coasts, and are currently carrying out tasks for building protection, but are primed for other jobs when needed.

Riot police officers from the Guardia Civil have also been moved to Catalonia from Pontevedra, Lleó, Madrid, Zaragoza, Sevilla and Valencia, according to ‘El Confidencial’. The reported goal is to have 700 members and another 800 from the National Police to operate in time for the verdict.