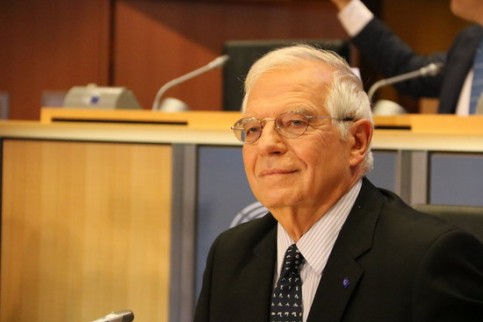 Spain’s Foreign Minister, Josep Borrell, has avoided discussing the Catalan issue in a hearing at the European Parliament for him to become the EU’s top diplomat.

‘Considering the post I aspire to, I’m not going to comment on a country’s internal affairs, including mine,’ said Borrell, who faced MEPs’ questions in Brussels on Monday afternoon.

As a member of the Spanish government, Borrell has been a steadfast opponent of the Catalan independence movement, leading to a number of diplomatic rows with other European countries.

Yet he avoided commenting on the issue in his bid to become the EU’s new High Representative for Foreign Affairs.

A former president of the EU Parliament from 2005 to 2007, and a social democratic heavyweight, Borrell’s candidacy is seen as an attempt by Spain’s acting prime minister, Pedro Sánchez, to gain influence in the new European Commission.

Borrell needs two-thirds of the EU chamber’s support in order to take up the post in November.

A Catalan himself, Borrell’s opposition to the independence push has proved controversial since he took up his ministerial post last year.

Last March, he stormed out of an interview with Germany’s public TV Deutsche Welle, claiming that journalist Tim Sebastian was ‘continuously lying’ when questioning him about the desire for constitutional reform in Spain – an issue connected to Catalonia’s bid for independence.

In a three-hour hearing, MEPs also asked Borrell about other controversial issues in which he has been involved, such as the €30,000 fine he received from Spain’s securities regulator for the sale of shares using privileged information.

Borrell also made headlines in November of last year for stating, in reference to US independence and the country’s levels of cohesiveness, that ‘All they did was kill four Indians.’

‘Why does the US have a higher level of political integration? Firstly, they all speak the same language. And secondly, they have very little history. They achieved independence with practically no history,’ he said at an event at a Madrid university.

Motion of no confidence against Catalan president fails

Details of curfews & restrictions for all regions during ‘State of Alarm’

Security crisis? The facts behind the Barcelona ‘crime wave’