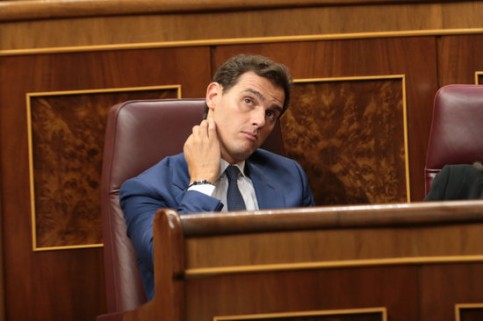 Albert Rivera, the head of the Ciudadanos (Cs) party in Spain, addressed Catalan president Quim Torra in a Tweet on Thursday, by saying: ‘In a democracy, judges issue sentences and not politicians, like you would like Mr. Torra. If they convict your colleagues for the separatist coup in Catalonia, you have two options: either accept the verdict or end up like them.’

The comment comes hours after Torra gave a talk in Madrid in which he affirmed that a potential guilty verdict in the Supreme Court for the jailed pro-independence leaders – which is expected late September or early October – would mark a new era ‘culminating’ in independence. Catalonia’s head of government also said he will not ‘accept’ the verdict.

The head of the People’s Party (PP) in Catalonia, Alejandro Fernández, criticized Torra’s comments by casting doubt on the veracity of his assertions: ‘Before taking his threats seriously, we should all remember that Torra said he would name Puigdemont president and that Catalonia would be independent in 6 months’ time.’

On the other hand, Jessica Albiach of Catalunya en Comú said that Torra should stop making empty statements and that he should explore all possible methods leading to the release of the jailed pro-independence leaders.

Catalan President: ‘If our colleagues are convicted, we will act accordingly’

8 Spanish police officials to be investigated for referendum crackdown

Smoking will be banned on 4 beaches in Barcelona this summer, in a pilot test