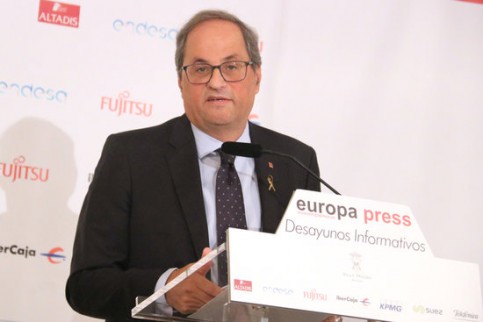 The Catalan president, Quim Torra, believes that a potential guilty verdict for the jailed political and civic leaders for the 2017 referendum would mark a new era in Catalonia that would ‘culminate’ in independence.

In a conference in Madrid on Thursday, Torra insisted that he will not ‘accept’ a guilty verdict, and laid out some of the key lines of the potential response from Catalonia that he intends to lead, including civil disobedience, non-violence, and cooperation among the institutions.

Torra ruled out a snap election as a response, arguing that after such a verdict, Catalonia would need to ‘strengthen’ its institutions.

Torra reinforced what he stressed some days ago, calling for a ‘democratic, peaceful confrontation’ with Spain. However, he refrained from going into detail on what this would mean.

When being asked about the possibility of calling a new independence referendum, he said that the independence camp needs to ‘find consensus’ on how to exercise the right to self-determination.

‘If our colleagues are convicted, we will act accordingly. We will again exercise all the rights that we have been denied,’ he said.

For Torra, who said that the verdict will be ‘a tipping point’ concerning the Catalan independence path, the society and the country institutions ‘hold fast facing an authoritarian state’.

‘This is a confrontation that we can only win if we shape it with tools from the 21st century and not the 19th,’ he added.

During his speech, he also reminded that Canada allowed for Quebec to hold a referendum, as the UK did with Scotland, and underlined that the British Labour leader, Jeremy Corbyn, has not rejected a second independence vote in Scotland.

‘Spain’s president [Pedro] Sánchez doesn’t seem to be like Corbyn. Why must Catalans accept democratic standards below Canada or the United Kingdom?’

Torra also praised the Hong Kong citizens for having achieved that the controversial extradition bill be ditched with their protests.

Still on Spain’s democracy, he repeated: ‘How much democracy is Spain able to assume?’

‘If Spain wants to be a democracy that respects citizens, it needs to listen to the voices demanding it to do it,’ said Torra, mentioning the UN Working Group on Arbitrary Detention’s plea to release the jailed leaders, and stances such as that of Amnesty International, Human Rights Watch, MPs across the world and Nobel prize laureates.

Concerning Pedro Sánchez’s latest proposal laid out on Wednesday, Torra said ‘it is worse than a no-proposal.’

Spain’s acting prime minister once again ruled out a referendum and called for ‘dialogue within the Spanish constitutional framework.’

Sánchez is seeking support so that he can stay in power in order and avoid a snap election to be held on 10 November, and Torra said that if there are no changes, his party Junts per Catalunya (JxCat) will not back the Socialist (PSOE ) leader.

Torra also commented on his upcoming trial for disobedience regarding the yellow ribbons controversy earlier this year. He announced he will ask for the proceeding’s nullity for ‘irregularities’ in the process. For the case he will also seek to disqualify some of the court members in charge with an appeal.

The court sessions have been scheduled for 25 and 26 September, which coincide with the Catalan Parliament’s annual general policy debate.

In the conference in Madrid, Torra said he will ask neither the court nor the parliament to change dates, and suggested that it is for the judges to decide whether they have to reschedule it. ‘It is not for me to decide, but for the court. They will know whether they believe in the separation of powers,’ he said.

Almodóvar’s ‘Pain and Glory’ to represent Spain at Oscars