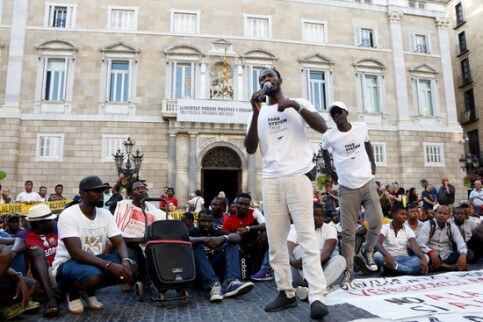 On Friday evening, hundreds of Barcelona’s illegal street sellers responded to the city council’s new crackdown on the practice known as ‘top manta‘ with a demonstration in the city centre.

Beginning at 6.30pm at Barceloneta and finishing up at Plaça Sant Jaume in front of the Barcelona City Council and Catalan government headquarters, the demonstration condemned the council’s ‘persecution and repression’ of the vendors.

The crowd chanted ‘Nobody is illegal’ and ‘Surviving is not a crime’ among other slogans fighting for their rights to work safely in the city.

The term ‘top manta’ borrows its name from how the unlicensed street sellers use blankets (mantes in Catalan) to carry their products from place to place, and put them on display in some of the most prominent tourist areas of Barcelona and in many other Catalan towns and cites. The blankets also mean that their wares can be quickly collected when the police appear.

Since the beginning of the week, a special unit of police officers has patrolled areas of the city popular with the vendors, such as the seafront, to prevent the sellers from setting up shop.

The Popular Union of Street Sellers, which represents the illegal vendors, said the protest was ‘against the criminalisation and repression’ of its members.

The street sellers argue that it is their only way to make a living.

A spokesman said the sellers feel ‘betrayed’ by the city council, which he claimed had pledged to do ‘everything possible to resolve the issue positively with social projects.’

Deputy mayor, Jaume Collboni, called the campaign ‘positive’, saying it aims to convince the public that buying legal products ‘contributes to a cohesive city model’, although it also comes with fines for making illegal purchases of up to 500 euros.

The campaign will be in Catalan, Spanish, French and English, and will be promoted on social media, as well as on posters in shops, hotels, bus shelters, and on public address systems and screens on the Metro underground system.

Part of the council’s Coexistence Campaign 2019, the initiative will go on until the end of September, and will also involve distributing some 28,000 postcards in stores in the city’s main shopping areas with a message thanking customers.

Collboni also linked the campaign to the efforts to make Barcelona safer, saying the city is facing a ‘crisis of insecurity’. ‘We cannot allow illegal activities to monopolise the public space and put social harmony at risk,’ he added.

At the same time, the deputy mayor said the local authority was open to talks with the ‘top manta’ sellers, yet insisted that the content of any talks with the sellers would have to be within ‘the legal framework of the city of Barcelona’ – although he did not shut the door to the possibility of ‘modifying municipal regulations’.

Collboni also addressed the social side to the issue, which he said ‘we are very aware of’ and said that in the next few months the council would make efforts to introduce social measures for ‘those people who find themselves in the sphere of illegal selling’.

At the same time crackdown on the thieving bastards who prey on tourists by picking pockets and stealing.