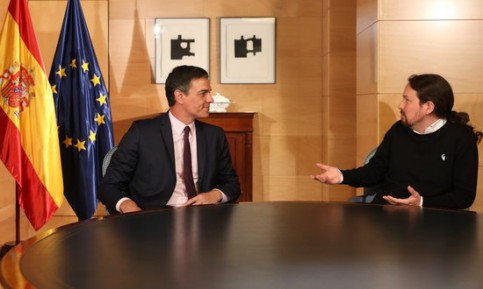 In the efforts to form a new Spanish government after his PSOE socialist party won the 28 April general election without a majority, acting prime minister Pedro Sánchez is willing to look at ‘all possible scenarios’, including giving cabinet places to members of left-wing ally, Podemos.

Reported by the ‘eldiario.es’ online newspaper on Thursday, and backed up by sources in the Spanish socialist party, it seems Sánchez is considering offering Podemos members minor cabinet posts whilst still ruling out a role for Podemos leader, Pablo Iglesias.

Citing ‘deep discrepancies’ – Iglesias supports a self-determination referendum in Catalonia, whilst Sánchez refuses to discuss the issue – sources in the PSOE suggest that Sánchez believes allowing Iglesias into the cabinet could destabilise the executive.

ALSO READ: Focus: why Catalonia is key to the investiture of Pedro Sánchez

Podemos sources welcomed the possibility of a left-wing coalition government as ‘excellent news’, but warned that the socialists would first have to remove all objections to certain candidates it might propose for potential cabinet positions.

Furthermore, Podemos says it is ‘absurd’ that ministries should not be headed by ‘people who were chosen by the people in the election’, and whilst accepting that it would be offered technical rather than political posts, insists that this ‘must be reflected’ in the government.

However, before taking any further decisions, Podemos will first consult its membership to see whether they are in favour of a coalition with the socialists. The vote began on Friday and will continue until Thursday, when the party leadership will evaluate the results.

Since Sánchez ousted the right-wing People’s Party (PP) from power last year with a no-confidence motion, Podemos has supported the socialists in parliament, but relations have been strained since the election, with the socialists reluctant to share power.

Sánchez’s motion also passed with the votes of the Catalan pro-independence parties, but the socialists want to avoid repeating that formula because the price for their support this time around would be negotiations for a self-determination referendum in Catalonia.