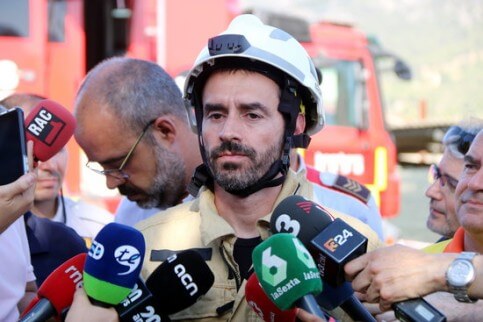 The fire of the Ribera d’Ebre in the Tarragona province of southern Catalonia is ‘on the road to stabilization’. The Catalan interior minister Miquel Buch confirmed early on Saturday morning that 90% of the perimeter of the fire is under control, but 10% of the fire is still active.

Operations chief in the Catalan fire brigade David Borrell told the media that the objectives set during the night have been achieved, especially on the right flank, where the crews have worked hard to control the wildfire.

The weather conditions on Saturday will make efforts ‘hard’ once again as the heatwave continues, and the teams in charge of the operation remain cautious. ‘We will not be calm until we see how the afternoon evolves,’ Borrell said.

Thermometers in many places in Catalonia registered more than 40 degrees Celsius on Friday, as the heatwave that began on Tuesday reached its height.

While temperatures are expected to begin declining on Saturday, in Terres de l’Ebre – where firefighters still attempt to contain the huge wildfire – they could even rise slightly.

Forecasts predict that by Tuesday general temperatures in most places of Spain will have fallen by as much as five degrees.

Could Spain be heading for yet another General Election?

6,000 expected to travel to Strasbourg for EU Parliament protest