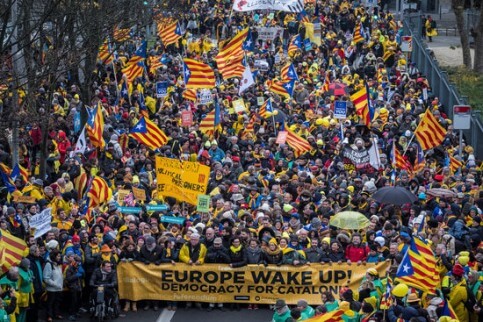 Around 6,000 people are expected to travel to Strasbourg for a protest on Tuesday 2 July, to coincide with the first plenary session of the new European Parliament following the recent elections.

The Council for the Catalan Republic – a private organisation headed by former Catalan president Carles Puigdemont, and which seeks to organise and promote the Catalan independence movement – has estimated that about 6,000 people will travel to Strasbourg in 80 coaches and two charter flights. They are to protest in support of ‘democracy, exiles, and reprisals’ and to demand the freedom of ‘political prisoners’.

The organisers have called upon citizens to make the protest in front of the headquarters of the European Parliament ‘massive’.

Carles Puigdemont, Toni Comín, and Oriol Junqueras were all elected in the recent European elections, but have so far not been able to take up their seats.

The current president of the Catalan government, Quim Torra, will also attend the protest, accompanied by his foreign affairs minister Alfred Bosch.

Puigdemont and Comín, both in exile since the fallout of the independence push in 2017 and still wanted by the Spanish authorities, were elected as MEPs in the recent European elections, but have not been able to take up their seats as they would need to travel to Madrid to do so, where they would presumably be arrested.

Meanwhile, the Greens–European Free Alliance have announced that they will leave a seat vacant for their jailed member Oriol Junqueras.

ALSO READ: Junqueras: ‘They’ve suspended us in Spain but they won’t be able to in Europe’

Antonio Tajani rejected the Catalans’ requests to be treated as MEPs and enjoy parliamentary immunity. The Italian also denied that the European Parliament would intervene in their case.

‘Until further notice by the Spanish authorities, I am currently not in a position to treat them as future members of the European Parliament,’ Tajani concluded in a brief, two-paragraph letter.

The president of the European Parliament argued that in case of disagreement, Puigdemont and Comín should complain to the Spanish authorities and courts.

The press officer for Oriol Junqueras’ party, Greens–European Free Alliance, Ruth Reichstein, described the situation of having to leave a seat empty as ‘not normal’.

Speaking in a press conference on Friday ahead of the opening plenary session next week, Reichstein said: ‘We do not know yet what will happen, so we will have an empty seat, a fact that we can not find normal.’

‘There is a member of our group that is in jail in Spain and who was not allowed to go to Madrid [to collect the credentials] because they were afraid of parliamentary immunity,’ Reichstein said.

The party plans to make the empty seat visible in some way, for example with the name of Junqueras or a yellow ribbon, the symbol of solidarity with the jailed and exiled Catalan independence leaders, although the exact manner has not yet been specified.

Earlier this week, a judge left the door open to potentially seeking the advice of the European Court of Justice over the issue of immunity for Junqueras. However, state prosecutors have said it is not ‘necessary nor obligatory’ to request this advice.

Catalonia wildfire ‘on road to stabilization’ with just 10% still active