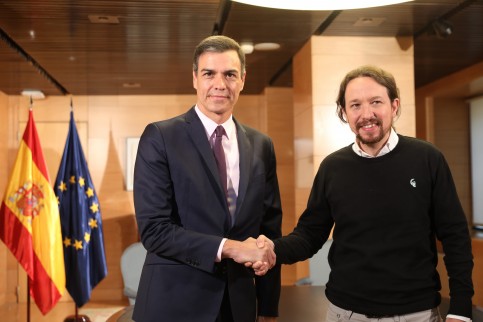 Spain’s Socialist (PSOE) party may have won the 28 April general election, but actually forming a viable government is proving to be very challenging – and they are even threatening new elections.

The Socialists were the election’s clear victors, winning 123 seats in congress, but that left them short of the 176 needed for a majority in the Spanish parliament’s lower house.

That forces acting-president and PSOE leader Pedro Sánchez to reach agreements with other parties, but while there are a number of options, none of them are straightforward.

The option on the table now is a deal with the Podemos party (which won 42 seats), led by Pablo Iglesias, but the two left-wing parties are locked in a game of ‘chicken’ with neither side willing to back down.

With the vote to appoint a new government due in July, the Socialists have started to raise the stakes to force Podemos’ hand and ensure that Sánchez continues in power.

Although Podemos has been supporting the Socialists since Sánchez became prime minister in June last year, it now wants a bigger role as a partner in a left-wing coalition government.

Yet, PSOE is determined to govern Spain alone and is only willing to offer Podemos some lesser administrative positions in exchange for its support in the congress.

On Thursday, Sánchez increased the pressure on Podemos by threatening a new election if it refuses to cooperate, ‘even though we are the last ones who want a repeat.’

PSOE spokeswoman, Adriana Lastra, joined in by warning that ‘politics is not Game of Thrones‘ and she echoed the threat of a snap election, with Podemos being held to blame.

While not ideal, the Socialists think Podemos has more to lose in a new election, after dropping 29 seats in April, and everything suggests they would pick up more seats.

PSOE has some margin should an attempt to appoint a new government in July fail, with another chance to try after summer, before a new election is automatically triggered.

What’s more, the Socialists have time on their side as the Ciudadanos (Cs) party has seen its position undermined in recent days by key defections of top party members.

Whilst Lastra said this week that the left-wing Podemos party is its ‘preferred partner’, the PSOE has also already appealed to Cs not to oppose Sánchez’s election as prime minister.

That was before Cs suffered the defections over its willingness to do deals with the far-right Vox party that is damaging its image both at home and abroad.

Podemos is aware of this and this week accused PSOE of being willing to come to an agreement with ‘the right in order to make [Sánchez’s] investiture possible’.

The Socialists reacted by throwing the charge back and asking Podemos if it is willing to block the swearing in of ‘a socialist president’ and take the side of parties on the right.

While parties such as the Catalan pro-independence Esquerra Republicana (ERC) party would be willing to help make Sánchez prime minister, the Socialists dread the price they would have to pay.

ERC, which increased its seats to 15, has said it will vote for Sánchez, but its support comes with the condition that the PSOE leader discuss a self-determination referendum.

Yet the Socialists have ruled that out, especially in the election campaign when the right-wing parties accused them of colluding with separatists bent on breaking up Spain.

In any case, even with the votes of Catalan and Basque nationalist parties, PSOE still needs Podemos’ votes. That means, for now, each left-wing party must wait to see who blinks first.

Catalonia wildfire ‘on road to stabilization’ with just 10% still active