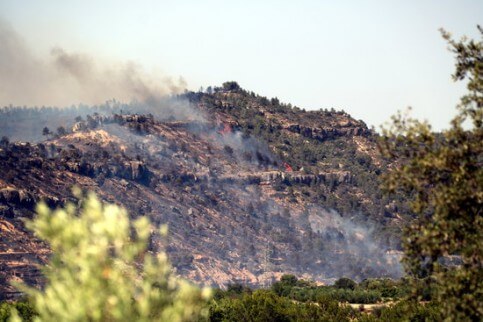 A wildfire that has broken out in southern Catalonia could become one of the worst affecting the area in the past 20 years, with more than 3,000 hectares already burning.

Firefighters worry that the Ribera d’Ebre wildfire in the province of Tarragona could extend to affect a total of 20,000 hectares before it is under control.

Although winds are expected to decrease in intensity, firefighters do not believe it will be under control by Thursday morning.

On Wednesday, 58 firefighting crews had been dispatched to control the fire initially affecting 2,500 hectares of land. The fire had forced a number of people out of their homes and farms, and forced the closure of five roads.

In trying to put out the fire, the crews are prioritising its right flank, which is spreading faster because of the wind.

Across Spain this week, the heatwave has already seen temperatures rise above 40 degrees in several areas.

With the high temperatures expected to last until Sunday, the authorities are advising the public to take special care when doing outdoor activities during the day, and to take precautions against the effects of the heat to protect babies and the elderly in particular.

The 13 Spanish restaurants ranked in the World’s Best 120: ‘Asador Etxebarri’ (No.3)