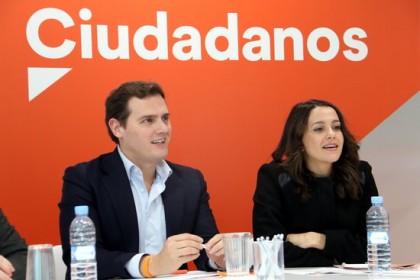 Despite a number of high profile resignations in recent days, Spain’s Ciudadanos (Cs) party insists it will not change direction, while its leader Albert Rivera has vowed to continue opposing Socialist (PSOE) leader Pedro Sánchez‘s attempt to form a new the Spanish government.

Monday saw three senior party members abandon the party, beginning with economic spokesman Toni Roldán, who said he was leaving because of the drift to the right by the party.

Roldán was followed by MEP Javier Nart, who said he was leaving due to differences with the party leadership and in particular, his objection to Rivera’s strategy of blocking Sánchez’s bid to return as the head of government.

On the same day, their candidate for the presidency of the Asturias region, Juan Vázquez, gave up his place in the party executive after it voted to maintain Rivera’s position.

Last week, Spain’s Socialists – who won the April 28 general election but without a majority – called on the Cs party to abstain in the vote to invest Sánchez, in order to save them having to rely on the votes of Catalan and Basque pro-independence parties in the Spanish parliament.

Yet Cs refuses to budge, with party spokesperson Inés Arrimadas insisting: ‘We will remain faithful to the mandate we received from the ballot box and to what we were told by Spaniards who voted for us knowing that we would not help to make Sánchez president.’

Cs’ willingness to reach coalition agreements with the far-right Vox party has also caused unease within the party’s ranks, and in explaining his reasons for abandoning the party Roldán warned that progress ‘can never come from the extremes’.

Cs has courted controversy over its links with the far-right ever since it came to an agreement with Vox to allow the conservative People’s Party (PP) to take the helm in the region of Andalusia, traditionally a Socialist stronghold.

With a similar three-way deal in Madrid, Arrimadas said the party will not change its coalition strategy, arguing that ‘we are ready to lead important governments like those of Andalusia and Madrid following the criteria that the party’s leadership unanimously voted for’.

Meanwhile, in another blow for the party, from Paris the Elysée has denied claims made by Rivera last week that French president Emmanuel Macron had given his support to Cs’ coalition agreements ‘either in public or in private’, calling the claims ‘erroneous’.

It all adds to the crisis the party is currently experiencing following the split this month with former French prime minister Manuel Valls, who ran for Barcelona mayor in the 26 May local elections with the backing of Cs.

The split came after Valls unconditionally offered his six votes in the city chamber to leftwing BComú’s candidate for mayor, Ada Colau, on the condition that she spurned the offer of a coalition agreement with the pro-independence Esquerra Republicana (ERC) party, which narrowly won the election.

After the split, Valls was critical of the party saying: ‘Ciudadanos calls itself liberal, progressive and pro-European, and many of those in the party are, but it has become the party now reaching agreements with a reactionary, anti-European force.’