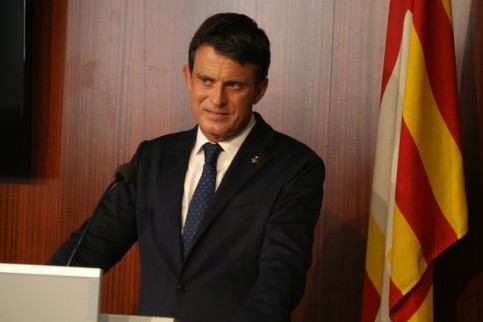 ‘Dangerous, wrong’ and linked to ‘reactionary, anti-European’ parties. This is how Manuel Valls described the Ciudadanos (Cs) party on Wednesday, two days after the unionist political force cut ties with him following his backing of Ada Colau as Barcelona mayor.

The former French prime minister blasted his former allies over their links to the far-right – the Cs party has been involved in several coalition governments supported by the far-right Vox party at a local and regional level.

‘Ciudadanos calls itself liberal, progressive and pro-European, and many of those in the party are, but it has become the party now reaching agreements with a reactionary, anti-European force,’ he said.

For him, Albert Rivera‘s party is leading a ‘serious drive’ getting closer to extremists, and also when dealing with the independence issue.

Indeed Valls said the party is following a ‘dangerous and wrong’ strategy when fighting against independence. The former French politician, himself strongly opposing the Catalan republic, described Cs’ politics as ‘when worse, better’, meaning that when there is more conflict and tension between blocs, it is better for the party.

In a press conference, he said that he will stay as Barcelona local councillor, and will try to bring together unionism from this position.

Manuel Valls ran for Barcelona mayor backed by Cs party – and although the list came only fourth, he became decisive with six councillors out of 41.

The election was won by pro-independence Ernest Maragall, but the Frenchman decided to back the second most voted candidate, Ada Colau, who was vying for reelection, in order to avoid a politician in favour of a Catalan republic getting the mayoral post.

This vote, supported by only two other local councillors of his group, meant Colau staying in power – but the Cs party was against this vote as it sees her as favourable to a Catalan republic as Maragall, and therefore not better than him.

This was the last straw of a turbulent relationship between the unionist party and the Catalan-born politician, during which Valls has insisted several times of the need for Cs to stay away from far-right Vox.

French president Emmanuel Macron‘s party has recently also warned the unionist party of its talks with Vox – both Macron’s En Marche and Cs will be part of the same group in the European Parliament.