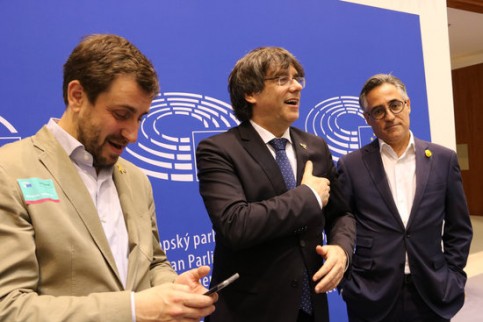 Three European Parliament seats won in the recent EU election by jailed and exiled Catalan pro-independence leaders are vacant, including that of former president Carles Puigdemont, as confirmed by Spain’s electoral authority (JEC) on Thursday.

Puigdemont was allowed to run in the 26 May EU election, as were Toni Comín – a former minister who also left Catalonia to seek refuge in Belgium – and Oriol Junqueras, the former Catalan vice president who currently remains jailed in Spain and on trial. Yet Spain blocked their attempt to make their election effective.

Meanwhile, the Spanish prosecutor is against taking Junqueras’ case to the same court. He was not granted a permit to attend a compulsory event to take up his seat on Monday.

The former vice president, waiting in a cell for his sentence, then requested the court in charge of the case to ask the European Court of Justice to have a say on him being excluded from the EU Parliament.

Junqueras’ lawyers urged Spain’s top court to ‘temporarily suspend’ the ban and file a series of ‘prejudicial questions’ to Luxembourg to determine whether the decision to prevent him from taking up his seat is against European law or not.

Yet on Thursday, Spain’s public prosecutor sided against the petition, arguing that the judges’ original decision is right and lawful.

The institution also rejects Junqueras’ Supreme Court appeal asking it to reconsider its decision, in which he argued that he may have immunity as an official from the moment he was elected MEP in the 26 May election.

For the prosecutor, immunity is only applicable when individuals fulfill all procedures required to take up their seats, culminating in Strasbourg on 2 July with the first plenary session of the new EU term.