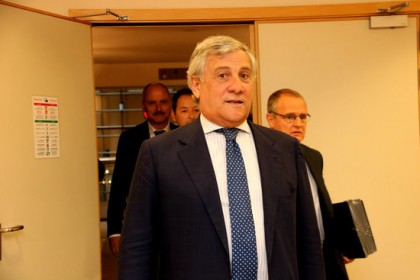 Antonio Tajani, the president of the European Parliament, has said that ‘it is Spain’s problem’ that some of their seats have been not been filled after the state declared those of exiled leaders Carles Puigdemont and Toni Comín and their jailed pro-independence colleague Oriol Junqueras vacant.

The three recently-elected MEPs could not take up their seats as they were prevented from attending the swearing-in process in Madrid. While the Puigdemont and Comín did not have their Spanish arrest warrants lifted, Junqueras was not granted permission to leave prison to take the oath.

Tajani made these remarks after a meeting of senior EU Parliament officials, where four of its vice-presidents requested clarification on the issue: Dimitrios Papadimoulis from Greece (GUE-NGL); Fabio Massimo Castaldo from Italy (EFDD); Pável Telicka from the Czech Republic (ALDE); and Heidi Hautala from Finland (Greens/EFA).

According to sources of the Catalan News Agency (ACN), during the meeting Tajani made it clear that it is within Spain’s powers to appoint and subsequently inform them of their MEPs.

Tajani even read out a ruling by the European Court of Justice, which states that ‘the European Parliament cannot get involved [deciding] in who is, and who is not an MEP’.

Talking to the press, Tajani also referred to the decision to suspend the provisional accreditation given to Spain’s MEPs following the election – a decision taken shortly after they refused access to Puigdemont and Comín to collect these passes as some other Spanish MEPs had done.

‘I did not take the decision, it is not a matter for the president, but one for the administration,’ he said on Monday.

Meanwhile, a group of 76 outgoing and incoming MEPs have called on the European Parliament’s bureau to ‘recognise and protect the political rights’ of the three Catalan independence leaders, who have been prevented from taking up their seats in Brussels by the Spanish authorities.

In a letter to the EU Parliament’s bureau, the signatories say that preventing the three politicians from taking up their seats is ‘a clear violation of their political rights and a disregard of more than two million European citizens that voted for them.’

Among the signatories to the letter are MEPs from five different parliamentary groups from across the political spectrum, with representatives from a number of different countries, such as Scotland, Ireland, Finland, Italy and France.

A number of MEPs from Spain also signed the letter: Ramon Tremosa of the PDeCAT party, Josep-Maria Terricabras and Jordi Solé of the ERC party, María Dolores Sánchez Caldentey of Podemos, and Basque representatives Izaskun Bilbao and Pernando Barrena.

With Junqueras refused permission to leave prison and Puigdemont and Comín unable to enter Spain over fears they will be arrested, none of the three were able to attend the Spanish congress on Monday morning to register as MEPs.