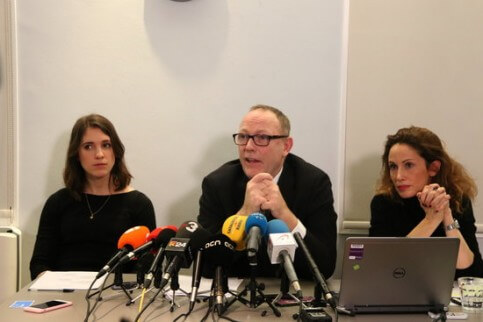 The lawyer for the Catalan pro-independence leaders taking their case to the United Nations, Ben Emmerson, has refuted the Spanish government’s accusations of a ‘conflict of interest’ between him and two members of the UN Working Group on Arbitrary Detention (WGAD).

Reacting to the body’s request for the ‘immediate’ release of politicians Oriol Junqueras, Jordi Sànchez and Jordi Cuixart, Madrid has since demanded that the members be disqualified for allegedly being close to Emmerson.

‘I have never met (or spoken) to any of the current members of WGAD. Two of them were formerly UN Special Rapporteurs at the same time as I was. Our staff members collaborated on joint letters, but I never dealt directly with either of them,’ Emmerson stated in a Tweet on Saturday.

‘Ad hominem attacks like this are the last refuge of a desperate government,’ he added, in a series of further Tweets. ‘It will all become clear when these bogus complaints are investigated by the UN.’

Emmerson also called on Spain’s acting Prime Minister, Pedro Sánchez, to ‘show some political judgment and maturity’, and ‘to accept the verdict of the WGAD’ – and ‘to stop this Stalinist show trial now,’ referring to the proceedings against the jailed leaders, who are prosecuted for rebellion. ‘Spain is acting like a rogue State,’ he added.

The Catalan foreign minister, Alfred Bosch, also complained about Spain’s response, saying that it is ‘the least intelligent’ they could have taken.

For Bosch, Madrid’s reputation ‘will be seriously damaged’ if it ignores the report. He also called on the king of Spain to take action and say: ‘Let’s fix it, let’s be a democratic country, let’s amend these failures.’

The working group also concluded that calls for self-determination are being suppressed by detaining them, and that trial is not fair nor the judges impartial.

The defendants’ presumption of innocence is also questioned, due to ‘political interference’ having been observed, the report stated.

As a result, the authors of the report argued for the ‘immediate’ release of Junqueras, Sànchez and Cuixart and that they be paid compensation