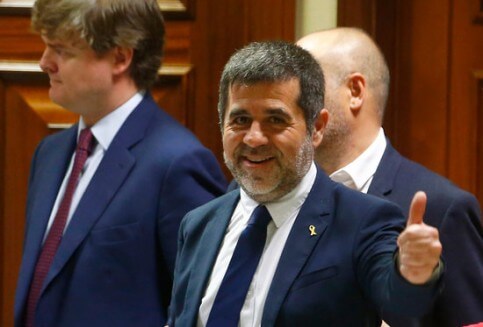 The Spanish Supreme Court has barred the jailed leader of a Catalan pro-independence party from meeting king Felipe VI as part of the customary post-electoral talks, alleging that his non-imprisoned colleagues could easily substitute him.

Jordi Sànchez, an activist turned politician who has spent almost 20 months behind bars in custody and is now one of 12 defendants in the Catalan Trial, had requested to speak with the monarch as the top candidate of Junts per Catalunya (JxCat), the party founded by former Catalan President Carles Puigdemont who is currently exiled in Belgium.

Sànchez and four other imprisoned politicians earned seats in the April 28 General Election despite being on trial for their role in the 2017 independence bid, which included a referendum and an independence declaration that was shot down by Spain.

Whilst being able to attend the opening session of the freshly elected parliamentary chambers, they were subsequently suspended as MPs and senators

ALSO READ: Junqueras: ‘They’ve suspended us in Spain, but won’t be able to in the EU’.

JxCat initially announced that should Sànchez not be allowed to leave prison to attend the event, the party would not send anyone else to meet with the monarch. However, it has since been reported by some Spanish media that Laura Borràs will attend in place of Sànchez.

Pedro Sánchez is set to keep his post as Spanish prime minister after making big gains in the general election. In the upcoming round of talks with party heads, the monarch is expected to entrust Sánchez to seek parliamentary support to form a new government.

Focus: who will become mayor of Barcelona?

Lawyer Ben Emmerson: ‘Spain is acting like a rogue State’