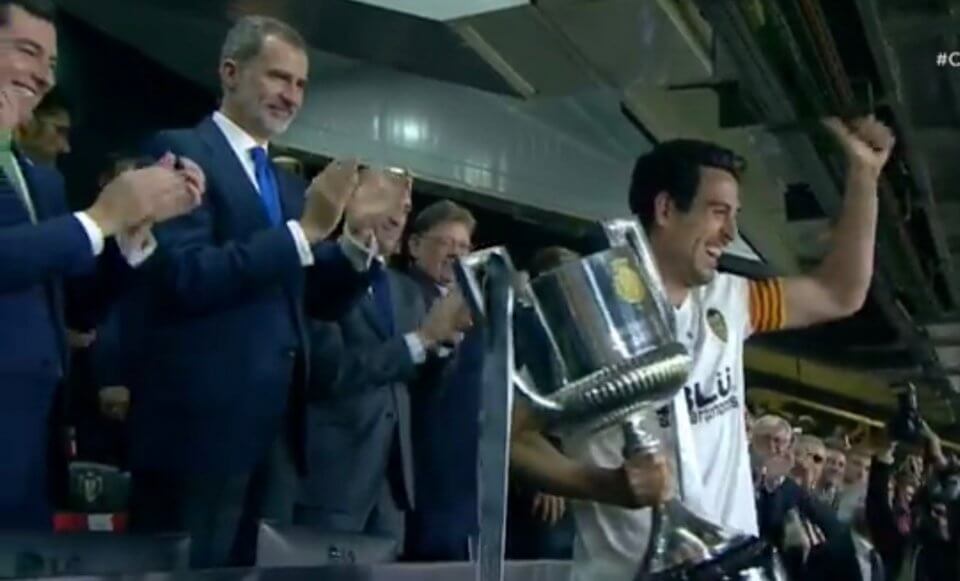 Valencia beat Barça 2-1 on Saturday to win the Copa del Rey, played at the Benito Villamarín stadium in Seville – their eighth title thanks to the goals of Kevin Gameiro and Rodrigo Moreno.

Despite being champions of La Liga, Barcelona needed another trophy to erase their Champions League nightmare against Liverpool – but instead suffered another shock defeat as Valencia pulled off a thrilling victory.

Chasing a record fifth consecutive triumph, Barça were undone by a relentless Valencia side, who maintained their lead after Lionel Messi pulled a goal back to set up a dramatic finish in Seville.

Kevin Gameiro and Rodrigo had scored twice within 13 minutes during the first half. Messi drove the comeback effort and Goncalo Guedes twice should have wrapped it up for Valencia, missing a one-on-one and then an open goal before the final whistle.

Valencia’s coach Marcelino, who could have been sacked when his team were four points off relegation in January, raced around the pitch in a frenzy. Barça players sank to their knees.

Messi admitted on Friday his team had still not recovered from the ‘hard blow’ suffered against Liverpool = and they definitely still seemed disheartened in Seville on Saturday, only coming alive after it was too late.

Messi had also thrown his support behind Barça’s coach Ernesto Valverde – although it remains to be seen whether the board continues to support him after two defeats have spoiled a brilliant La Liga campaign.

If Barça’s season ended at Anfield, Valencia’s arguably found life a few days later, as they moved into the top four for the first time and then held on to qualify for the Champions League.

Winning their first trophy since 2008, in the club’s centenary year, completes a remarkable comeback year that, after 15 games, had them languishing in 15th.

The minutes immediately before the Copa del Rey final between Barça and Valencia were also controversial. A high proportion of the Barça fans whistled and booed during the Spanish national anthem. The opposite to the attitude taken by the Valencia fans.