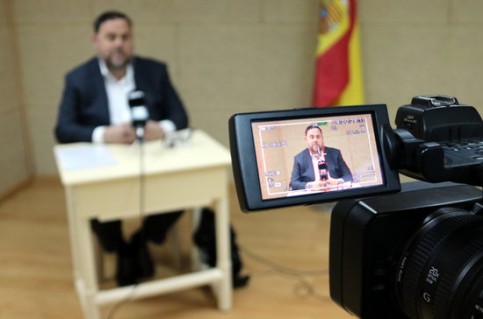 Spain’s electoral authority (JEC) has stopped the jailed Catalan politician, Oriol Junqueras – who is currently on trial at the Supreme Court – from taking part in a TV debate between candidates in the European Parliament election.

The programme, due to begin at 10pm on the Catalan public television channel, TV3, is incompatible with the timetable of the prison where the former Catalan vice president is being held, according to the authority.

Junqueras, the Esquerra Republicana (ERC) party’s main candidate, was scheduled to join the debate on Catalan public TV3 via video link from prison. Junqueras has been in custody for over a year while being tried in the Supreme Court for his part in the 2017 independence bid.

Toni Comín, the second candidate for Lliures per Europa (‘Free for Europe’) – and linked to the Junts per Catalunya (JxCat) party – is scheduled to do the same from exile in Belgium, where he went following the declaration of independence in 2017.

Both candidates were members of the Catalan government during the bid to split from Spain in 2017, Junqueras serving as vice president and Comín as health minister.

On Monday, the electoral authority for Barcelona had given the green light for Junqueras, and Toni Comín to take part in the TV debate.

That original ruling was in response to an appeal against Junqueras appearing from the Ciudadanos (Cs) party, a decision the party’s spokesman, Carlos Carrizosa, called ‘scandalous’ and an ‘infringement of equality’ towards the other candidates.

Yet, it was an objection by the prison service, on the grounds that allowing the video-conferencing facilities to be used at that time would be disruptive, that led the electoral authority to overrule the previous decision and bar Junqueras from taking part.

The electoral authority also turned down requests by Junqueras to do interviews with the Catalunya Ràdio radio station and the Ara newspaper on the morning of 16 May, because the video-conferencing facilities ‘have already been reserved’ for court business.

Spain recalls frigate from accompanying US carrier in Gulf