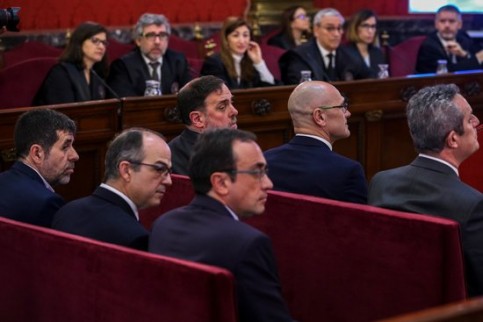 Spain’s Supreme Court will allow the five newly-elected Catalan MPs – currently still in custody whilst on trial in Madrid – to swear in and attend the opening sessions of the new Spanish Congress and Senate on 21 May.

Their request for release, however, pending the verdict of the trial in order to begin work in Spain’s Parliament was turned down by the judges in a ruling made public on Tuesday.

The defence teams had appealed to the court to ask for parliamentary approval to carry on with the trial once they become elected representatives, but this was also refused.

The elected politicians will be given the freedom of movement within the Spanish Congress, but police agents will be placed at the doors in order to prevent any prospective escape attempt.

Sources close to the Congress and Senate say that the imprisoned leaders will be brought into the chamber buildings via the underground car park.

The law states that if the Supreme Court wants to try MPs or senators in the Spanish Parliament, the chamber in question must hold a vote on whether to give its consent. However, in this case, the judges have argued that it does not apply since the proceedings began before the defendants had been elected to national office in Madrid.

Lawyers of the elected Catalan officials lamented the decision today, saying that the court has chosen a ‘limited, minimal, and restrictive’ interpretation of their rights.

The legal representatives of the five elected politicians said their clients will not be at the chambers ‘only as a formality and to take a picture,’ but to undertake their duties like the other elected MPs and senators, such as making statements to the media and joining meetings with parliamentary groups.

‘Parliamentary immunity cannot be a privilege but a guarantee,’ said Andreu van den Eynde, the lawyer of Oriol Junqueras and Raül Romeva.

The leader of left-wing party Esquerra Republicana (ERC) and former Catalan vice-president, Oriol Junqueras, won a seat in Spain’s Congress in the 28 April general election, as well as the Junts per Catalunya (JxCat) party’s former ministers Jordi Turull and Josep Rull. Jordi Sànchez, activist and former president of the Catalan National Assembly (ANC), was also elected as an MP.

Raül Romeva, former Catalan foreign affairs minister and also a member of the ERC party, won a seat in the Spanish Senate.

They have all been in custody for between 14 and 19 months, as well as four other pro-independence politicians and activists, all of whom are currently on trial for rebellion

Catalan Trial: click here full details of those accused, the charges, and the accusers..