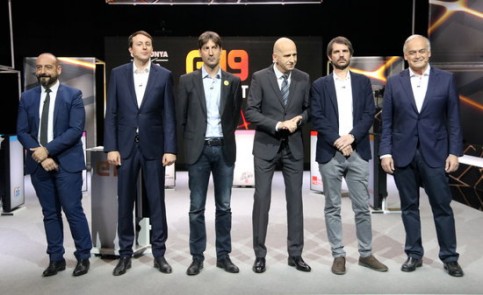 One of the candidates taking part in a TV debate for the EU Parliament elections on the Catalan public TV3 station walked off the set on Tuesday evening.

Aleix Sarri, a candidate representing the former Catalan president Carles Puigdemont’s election list, rejected the fact that Spain’s electoral authority had barred a jailed and an exiled candidate from taking part in the debate.

The Esquerra Republicana (ERC) party’s frontrunner, Oriol Junqueras, in custody whilst on trial, was not allowed to take part because it was ‘incompatible’ with the timetables of the prison where he is being held.

The Junts per Catalunya (JxCat) party’s second-in-command, Toni Comín, in exile, was also finally barred on the grounds that it would not be fair him taking part via video-link while the other candidates were present in the TV studio.

Jordi Solé, one of the candidates of ERC, also protested by handing in a recorder to the TV presenter with a message from Junqueras, asking for it to be recorded in the final part of debate.

The Greens’ candidate, Ernest Urtasun, also supported the jailed and exiled leaders barred from taking part in the televised debate.

The candidate for the Socialists (PSC), Javi López, called on all parties to ‘listen to Europe’ and ‘engage in dialogue’ to find a way out of the Catalan crisis.

Meanwhile, Esteban González Pons, member of the People’s Party (PP), said situations of jailed Oriol Junqueras and exiled Carles Puigdemont were not comparable. ‘The former is in a cell, while the other is in a mansion in the wealthiest part of Brussels,’ he stated.

And the candidate for Ciudadanos (Cs), Jordi Cañas, accused the jailed and the exiled leaders barred from the EU election televised debate of ‘coup-mongers’, referring to their role in the 2017 independence push.

All of the candidates found some compromise in asking for the Catalan language to be official in the EU, and also coincided in moving forward with the fight against the climate change.

Other hot topics in the debate, in which candidates mostly disagreed, was the dilemma between continuing or ending austerity measures, the reform of the Eurozone, the opportunities of Brexit and the creation of a European army.