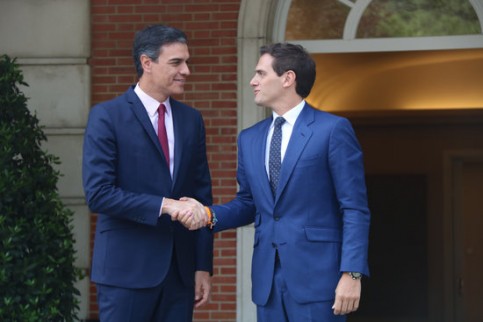 As Spain’s acting Prime Minister, Pedro Sánchez, has begun talks with other political parties in search of potential alliances that will allow his Socialist Party (PSOE) to form a majority government, Catalonia remains one of the key issues.

On Tuesday, the leader of the Ciudadanos (Cs) party, Albert Rivera, offered Sánchez his party’s full support in both houses of the Spanish parliament for reimposing direct rule on Catalonia by reactivating Article 155 of the Constitution.

Catalonia’s self-rule was suspended in 2017 under Mariano Rajoy‘s leadership following the independence bid, and Cs’ opposition to the pro-independence Catalan government has led it to repeatedly call for direct rule to be restored.

Sánchez’s meeting with Rivera followed a similar meeting on Monday with Pablo Casado, leader of the People’s Party (PP), who said that the possibility of the Socialists allying with ‘regionalist parties’ such as Catalan pro-independence groups would not be ‘optimal’.

Meanwhile, the Catalan government warned on Tuesday that it is ‘concerned’ that Sánchez and Casado have reached an agreement on Catalonia that would prove to be detrimental to the interests of Catalans.

‘We are concerned about the direction of Sánchez’s first moves. PP and PSOE have reached agreement on the issue of Catalonia and that is surely not a good thing for Catalonia,’ said government spokeswoman, Meritxell Budó.

The spokeswoman warned Sánchez that he does not have the powers ‘to decide how and when to govern Catalonia’, and she urged the prime minister-elect to focus on ‘reducing tensions and opening channels of dialogue’.

Jailed Catalans request release to be sworn in as MPs