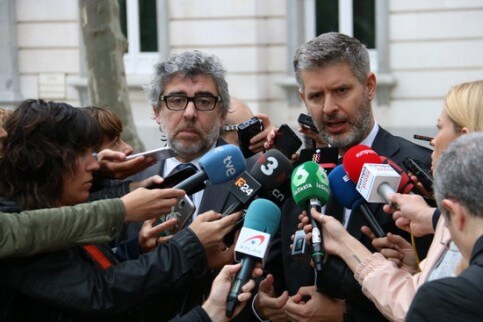 The lawyers of five Catalan politicians currently still in custody whilst on trial for the 2017 independence bid, have asked the Supreme Court to allow them temporary release so they can officially take up the seats they won in the Spanish general election on 28 April.

Former Catalan vice-president Oriol Junqueras, former ministers Jordi Turull, Josep Rull and Raül Romeva, and activist-turned-politician Jordi Sànchez, have made a formal request to be allowed out of custody on 21 May to attend the swearing-in sessions at the Congress or the Senate.

In their written appeals, the MPs also reminded the court that it must formally petition the chambers to be able to continue trying elected representatives, who enjoy parliamentary immunity under the Spanish Constitution and criminal law.

Processing the requests is expected to take some time and could affect the on-going trial of the pro-independence leaders, however the five MPs have not asked the court to suspend sessions of the trial whilst considering the appeals.

It is the second time that the politicians have requested they be released since the trial started. The first appeal, which was turned down, was made when they asked to be allowed out of custody to campaign for the election.