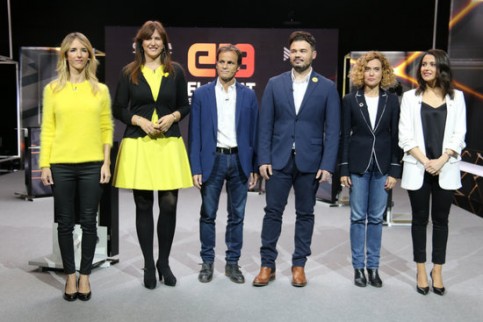 Catalans have voted in their masses in the Spanish general election, after a campaign that has revolved around the independence bid and the rise of the far-right.

The last provisional figures for the day showed a turnout in Catalonia of 64.2%, some 18% higher than in the last elections in 2016 (which in turn had seen a number of voters at 46.3%). In the whole of Spain the 6pm figures showed a participation of 60.7% (numbers which three years ago were at 51.2%).

Earlier provisional figures from midday, released after 2pm, showed a 43.5% turnout in Catalonia, an 11% increase compared with the previous general election in 2016.

In one of Spain’s most crucial elections in decades, Catalonia has taken centre stage following a campaign with most parties having an eye on the 2017 independence bid, when a referendum and a declaration of independence provoked an unprecedented political crisis.

Now, the leaders of the main pro-independence parties are running as candidates from prison, and unionist right-wing parties repeatedly attacked the Spanish president Pedro Sánchez for coming to power thanks to the votes from Catalan parties.

While the turnout rose in Spain as a whole (41.4%, a 4.5% increase), it could partly be due to the skyrocketing numbers in Catalonia.

Polling places opened for voting at 9am, and closed at 8pm.