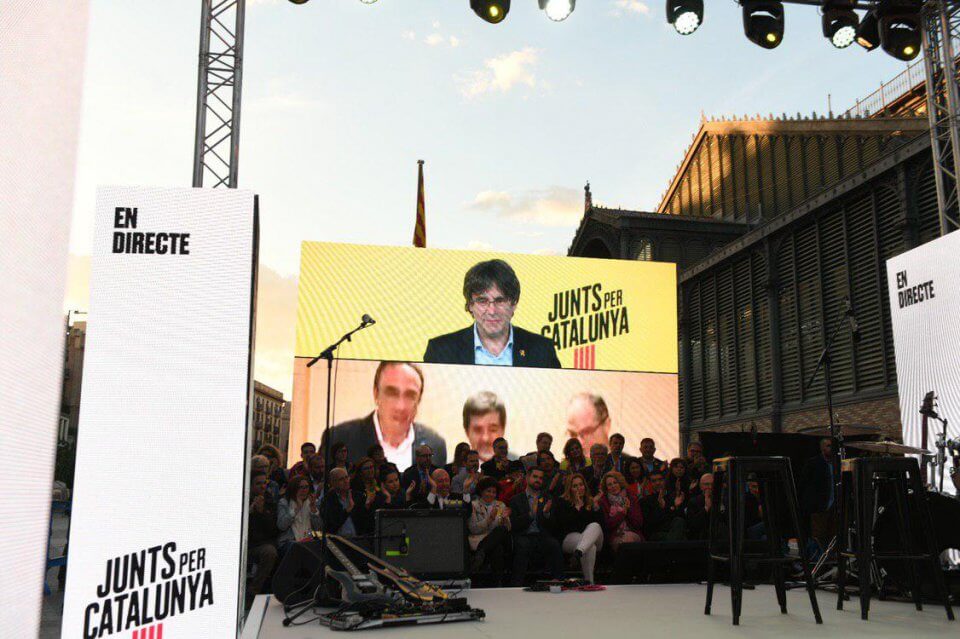 The Junts per Catalunya (JxCat) (‘Together for Catalonia’) party led by exiled former Catalan president Carles Puigdemont was forced to forge its own path for the December 2017 Catalan elections after Esquerra Republicana (ERC) rejected to continue standing in the political alliance of Junts pel Sí (‘Together for Yes’).

Junts pel Sí had governed Catalonia up until the dissolution of the Catalan government after the October 2017 independence referendum, the declaration of independence, and the subsequent imposition of direct rule (under Article 155) from Madrid.

Topping the election ticket for JcCat is Jordi Sànchez, the activist-turned-politician who is currently on trial in the Supreme Court for his role in the 2017 independence push and in provisional detention for 18 months. Former Catalan minister for culture Laura Borràs is second behind Sànchez on their list of candidates for the Spanish Congress.

With candidates Jordi Sànchez, Jordi Turull, and Josep Rull all currently on trial, Spain could be headed for uncharted territory if any or all of the candidates are elected as MPs in the Spanish Congress.

In the Catalan trial, the three politicians are facing charges of rebellion, sedition, and misuse of public funds, and could be given prison sentences lasting decades.

How any of the currently-jailed leaders would be able to take up their duties as MPs in the Spanish Congress while also being imprisoned and facing trial, is unknown as of yet.

However, despite being detained, the Spanish Electoral Authority has granted them permission to give press conferences and partake in political rallies ahead of the general election.

Jordi Sànchez gave press conferences with EFE and the Catalan News Agency, while Jordi Turull took part in a campaign rally last week. All were delivered live from prison, via video link, leading to the jailed candidates to repeatedly comment on the ‘strange’ nature of this campaign.

The party holds an overall centrist political position, with socially liberal policies. They are pro European Union and want an independent Republic of Catalonia to form part of the EU.

Persuading the Spanish government to agree on an independence referendum is among their main priorities ahead of the 28 April general election. Yet, it is still up in the air whether this will be an indispensable condition for helping the Socialist (PSOE) leader, Pedro Sánchez, to stay in office as Spanish prime minister.

Naturally, with a number of high profile and top-ranking candidates on trial for the parts they played in the 2017 independence bid, fighting for the release of the jailed leaders will also be high on the list of priorities for Junts per Catalunya.

As well as jailed leaders, the party also has many of their top names currently in exile, including the former president Carles Puigdemont, who the party will be fighting to be allowed to return safely and legally to the country. Puigdemont will also be contesting May’s European elections from Belgium.

Polls currently show Junts per Catalunya as the fourth-strongest party in Catalonia, behind Esquerra Republicana (ERC), the Catalan Socialists (PSC) [the Catalan wing of PSOE] – and the Catalunya En Comú-Podem party (associated to the national Podemos party). Junts per Catalunya are predicted to win 5-7 seats in the Spanish Congress according to the Centre for Opinion Studies.