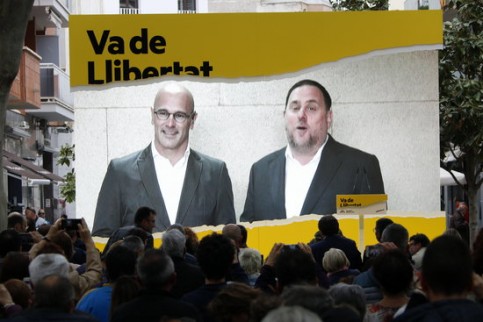 Esquerra Republicana (ERC) – the ‘Republican Left of Catalonia’ party – has been crusading for an independent, social democratic Catalan state for 88 years.

It has survived civil war, dictatorship, the transition back to democracy – and repeated political mergers and divergence ever since.

Now, 18 months on from the fateful events that resulted in the imprisonment of four of its leaders, currently on trial for rebellion, Esquerra is hoping to become Catalonia’s largest party for the first time at any domestic election.

With such a mandate, they would seek to negotiate with the Spanish government – so long as it’s a coalition of the left.

Its massive hope – some would say a pipe dream – is that, if pro-independence parties win an overall majority of the Catalan vote for the first time at a general election, this could finally lead to Madrid sanctioning an independence referendum.

‘I think everyone realises how important it is to prove the Socialists wrong and send out a message to the world, especially the EU, by ensuring the Catalan republicanism embodied in Esquerra Republicana wins the general election,’ said Gabriel Rufián, one of a party’s senior MPs in the Madrid Congress.

Although Rufián (famous for his sharp rhetoric and scathing Twitter banter) is the party’s top candidate attending party rallies, the number one of the candidacy is Esquerra’s official leader, Oriol Junqueras, the Catalan vice-president at the time of the crisis.

With him in jail, it has been a strange campaign for the party. Junqueras used an exclusive press conference with the Catalan News Agency to argue that supporting Esquerra is the only way of stopping the Spanish Socialist party (PSOE) from working with fierce unionists Ciudadanos (Cs).

‘It’s obvious that under no circumstances, neither directly nor indirectly, would we facilitate a far-right government,’ he said. ‘That means giving our support and votes to other options while insisting on our conditions. We are convinced that voting for anyone else would end up with a Socialists-Ciudadanos pact.

That’s because – unlike the hardline Catalan Front Republicà (FR), and more openly than centrists Junts per Catalunya (JxCat) – ERC are willing to talk to the Socialists themselves, though they still vow to settle for no less than self-determination.

‘The only solution is dialogue, negotiation and finally a vote on the future of Catalonia,’ said Pere Aragonès, Junqueras’s successor as vice-president. ‘I’m sure that Pedro Sánchez knows that this is the only possible path for Catalan society and for Spanish society.’

For the party faithful, it’s a matter of compassion as well as politics. A vote for Esquerra is being sold as a sympathy vote for their brains behind bars: both Junqueras and ex-minister Raül Romeva who are standing in key roles.

Both Oriol Junqueras and Raül Romeva appeared via video link at an ERC rally on 21 April, ahead of the elections, under the ‘It’s about freedom’ slogan of the party.

Junqueras implored supporters to go out and win the elections because the votes can ‘free all of [the jailed Catalan leaders.]’

He asked voters to ’embarrass’ those who have prosecuted the Catalan leaders for the 2017 independence push. ‘Mobilise people, make the mobilisation more massive than ever, and that the ballot boxes are filled with votes of freedom,’ the Esquerra leader exclaimed.

Raül Romeva called for a ‘massive’, ‘excited’ and ‘determined’ vote for the republican party to build a country for ‘everyone’.