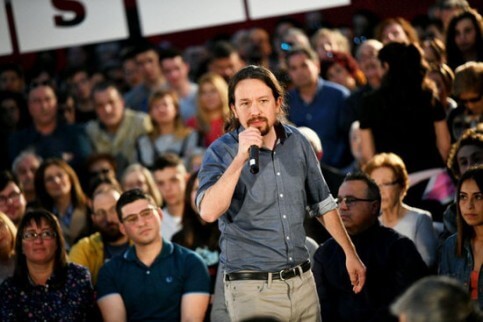 The left-wing Unidas Podemos party (‘United We Can’ in English), could end up playing a major role in deciding who gets to be the next Spanish prime minister after the elections this Sunday 28 April.

The polls suggest that support for the party is falling, but this could be down to the greater visibility the Socialists (PSOE) have enjoyed as Spain’s ruling party over the past year.

Ideologically aligned with the Socialists, albeit more left-leaning than the current ruling executive, the party is expected to help Pedro Sánchez to continue in his role as prime minister, should there be an opportunity to form a coalition.

Making this even more likely will be the determination of the left to prevent the trio of right-wing parties – the People’s Party (PP), Ciudadanos (Cs), and the far-right Vox – from forming a coalition government.

However, the price the Socialists may have to pay for the support of Podemos could be some positions in Pedro Sánchez’s future cabinet.

Only set up five years ago, Podemos was founded out of a feeling of disillusionment with the political climate of the time, widely felt across Spain, and marked by corruption scandals and austerity policies.

Four months later, the party ran in European elections, winning almost 8% of the votes cast in the country, and they boosted their support by working to empower local communities.

The party’s bottom-up approach proved popular with people in all levels of society, who also found its anti-corruption, environmental and social justice policies attractive.

ALSO READ: As elections near, Spain’s Podemos on verge of split

Podemos is the only mainstream party that is seriously questioning the role of the monarchy and the Spanish constitution as it stands.

in Catalonia, although it also wants more than two options than ‘for or against’ independence.

Party leader Pablo Iglesias wants Catalonia to continue as part of Spain, but says his party would respect the will of the 80% of Catalans – according to polls – who want a referendum.

Also where Catalonia is concerned, Podemos has called for the release of jailed Catalan leaders on trial in Spain’s Supreme Court, and the return of those in exile.