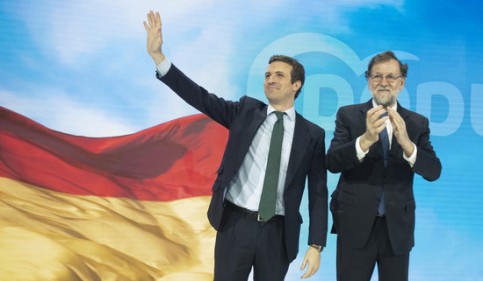 After decades of undisputed hegemony among right-wing voters in Spain, the People’s Party (PP) is fighting to put down growing right-wing (and far-right) rivalry ahead of the crucial general election this Sunday 28 April, by doubling down on its hardline approach to Catalan independence.

Having replaced Mariano Rajoy as leader of the party, Pablo Casado has personally tried to put down the growing rivalry by hardening his approach to the independence movement.

On Sunday, PP will head to the polls after one of its worst years since the foundations of the party were laid in 1977 by a former minister of the dictator Francisco Franco.

Former Spanish prime minister Mariano Rajoy resigned as the party head in July 2018, shortly after being ousted in a no-confidence vote. After surviving the financial crisis and Catalonia’s push for independence, it was a corruption scandal that dealt the final blow to his time in office.

The right-wing party was convicted for benefitting from a bribery scheme in the so-called Gürtel corruption case, and a long-fragmented opposition united to replace Rajoy and PP with a Socialist government led by Pedro Sánchez.

Rajoy quit politics, and the leadership vacuum was filled by the young hardliner Casado.

As the head of the opposition, Casado saw the party’s approval ratings drop as the Socialists began to soar in polls.

Additionally, Ciudadanos (Cs) and far-right Vox gained popularity by overtaking PP on their tough approach to the Catalan crisis, a movement which had seen a referendum and a declaration of independence in 2017, all despite opposition from Spanish courts.

Casado’s strategy was to attack Sánchez through Catalan pro-indendence parties, which helped his Socialist government come to power.

‘Pedro Sánchez has crossed red lines that had never before been crossed in Spanish politics or in any western democracy,’ Casado said at a political rally in Barcelona. ‘The enemies of Spain, terrorists and coup d’etat perpetrators, are his allies.’

With 9 Catalan leaders in prison facing trial under rebellion charges, Casado wants to prohibit presidential pardons for such offences, as he has repeatedly warned against the possibility of Sánchez letting them go free. He also wants to make unauthorised referendums a criminal offence.

PP also wants to suspend self-rule in Catalonia and impose direct control from Madrid – the same exceptional measure used by Rajoy during the peak of the Catalan crisis. This time, though, Casado promises to make it last longer in order to target public media, Catalonia’s own police force, and schools.

According to recent surveys, the prospects of PP for the 28 April election are bleak. His party will most certainly be dethroned by the Socialists (PSOE) as Spain’s largest. And it could lose half its seats in Congress to other right-wing parties.

In Catalonia itself, the PP could become marginal or have no seats at all. Yet, Casado could still become Spain’s next prime minister, if right-wing and far-right parties win a majority of seats in Congress.