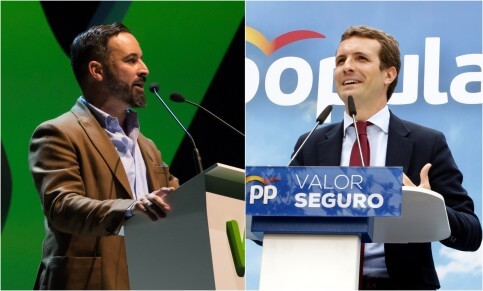 The head of Spain’s main right-wing People’s Party (PP) has opened the door to forming a government with the far-right Vox party, should right-wing parties win a majority of seats following the general election on Sunday 28 April.

Pablo Casado, the successor of former Spanish prime minister Mariano Rajoy to lead the PP, has embraced a government deal with Vox on Friday for the first time since the election campaign kicked off two weeks ago.

With a tough approach on the Catalan independence crisis, Vox is expected to make big gains and become the first unmistakably far-right party to enter the Spanish Congress since the transition to democracy 40 years ago.

Vox’s recent breakthrough in the election in Andalusia made possible a right-wing government between PP and Ciudadanos (Cs) in the southern region, thus dealing a major blow to Spain’s ruling Socialist party in its historic bastion.

With the election campaign drawing to a close, PP and Cs are competing to present themselves as the would-be leaders of a right-wing government in Madrid, with both parties using the Catalan independence crisis to attack Spanish Prime Minister Pedro Sánchez.

While Cs leader Albert Rivera has tried to distance himself from Vox and its agenda on issues such as LGTBQ and women’s rights, Casado has assured that ‘Vox sympathisers have no reasons to not vote PP.’

On a radio interview on Friday, Casado said that Vox would have the ‘influence they want’ to enter the government [with the PP].

On the other side of the political spectrum, Sánchez has hinted at a government deal between the Socialists (PSOE) and Unidas Podemos, the left-wing anti-austerity party led by Pablo Iglesias.

‘I have no problem with Podemos entering the government,’ said Sánchez in an interview with El País newspaper.

After weeks of hesitation, Sánchez is finally accepting Podemos’ request to rule Spain together following the 28 April election, thus cooling down the prospects of a government deal between the Socialists and Cs.

Sánchez says he aims to see out parliamentary term