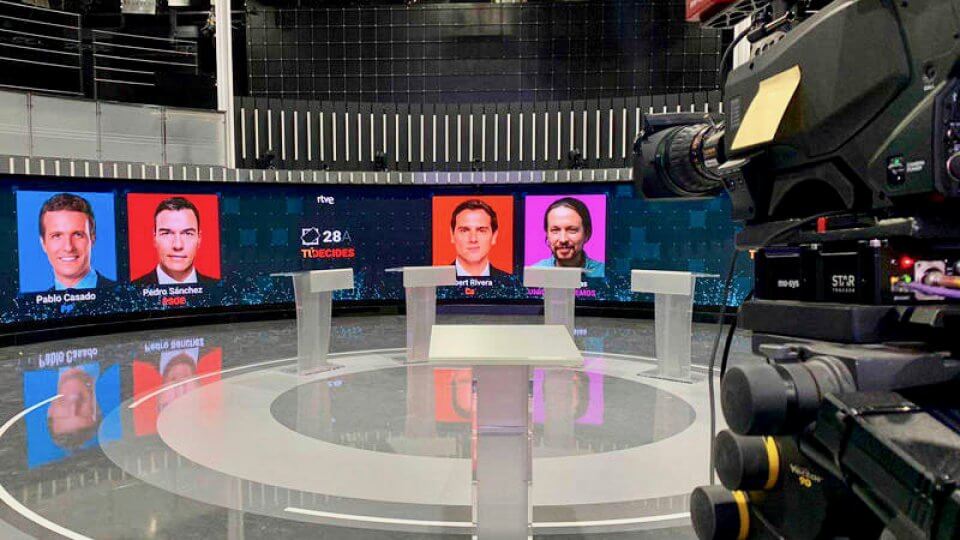 With two TV election debates on Monday and Tuesday this week, Catalonia continues to be a major issue for all parties running in the Spanish general election, set to take place on Sunday 28 April.

A range of proposals and formulas have been put forward by each party for dealing with the political conflict that reached its height with the independence referendum on 1 October 2017, and with the Catalan trial on-going.

While avoiding all mention of Catalonia in its manifesto, the current ruling Socialist (PSOE) party has since had to address the source of Spain’s largest constitutional crisis since the return of democracy.

Spanish Prime Minister Pedro Sánchez has been firm that where allowing a referendum on self-determination is concerned, ‘no means no’ – although he may have to rely on the support of the pro-independence parties to be able to form a government.

Spain’s main right-wing People’s Party (PP) has thrown its weight behind strengthening Spanish unity, pledging to ban ‘violent’ parties that support ‘Catalan separatism’ and blocking the funding of pro-independence parties whose leaders might be sent to prison for rebellion or sedition.

PP leader Pablo Casado has also spoken about reimposing direct rule (via Article 155) on Catalonia and blocking any further transfer of powers to the autonomous communities.

Fiercely anti-independence, the Ciudadanos (Cs) party also favours a return to direct rule in Catalonia, as well as reviewing the funding of ‘violent’ parties.

Party head Albert Rivera has also spoken about changing electoral law to make it harder for nationalist parties to win seats in the Spanish parliament. With Catalan the working language in schools in Catalonia, Cs also wants to ‘guarantee’ the use of Spanish in schools to avoid ‘indoctrination’ in the classroom.

The left-wing Podemos party differs from its Socialist ally, but is in-line with its En Comú Podem ally in Catalonia, in favour of an agreed referendum on self-determination, albeit with more options than just a simple choice between independence or continuing with the status quo.

Podemos leader Pablo Iglesias argues that such a vote is the best way to ensure Spain’s unity because ‘if support for independence reaches 80%, no law can prevent it’.

Pledging to ‘make Spain great again’, the far-right Vox party led by Santiago Abascal argues for suspending Catalonia’s self-rule and banning parties and organisations ‘that pursue the destruction of the nation’s territorial unity and sovereignty’.

Vox also favours putting Spanish above Spain’s other co-official languages, getting rid of the Catalan police (the Mossos d’Esquadra), and repealing the historical memory law, aimed at recognising the victims of the Spanish Civil War.

With the polls predicting it will be the most-voted party in Catalonia, the pro-independence Esquerra Republicana (ERC) claims to be the best bet to avoid a coalition between the PSOE and the Cs parties, and says it is willing to talk to Pedro Sánchez about lending him support.

With the slogan ‘It’s about liberty’, ERC also styles itself as the best option to ‘defend the right to self-determination’, with an agreed referendum an the top of its manifesto.

Carles Puigdemont, former Catalan president and leader of the pro-independence Junts per Catalunya (JxCat) party, has warned there will be no ‘blank cheques’ in Madrid if its votes are needed to be able to form a government.

‘Dialogue and self-determination’ are the conditions that the party has set for its support. Meanwhile, JxCat’s main candidate Jordi Sánchez, who is on trial in the Supreme Court, sees Pedro Sánchez as ‘the lesser evil’.

Also in Catalonia, the left-wing En Comú Podem party (ECP) also favours a self-determination referendum, but proposes convoking the vote through the Spanish Congress rather than bilateral dialogue, as ERC wants. While ECP does not back outright independence, it wants Catalonia to be recognised as a nation within Spain, and a reform of the criminal code to prevent the judiciary’s ‘arbitrary’ interpretation of rebellion and sedition, with which the jailed Catalan leaders are charged.

The left-wing coalition Front Republicà (FR) in Catalonia would prefer a united front among the pro-independence parties, and firmly conditions its support for other parties on their acceptance of a self-determination referendum and the release of Catalan leaders being tried in the Supreme Court.