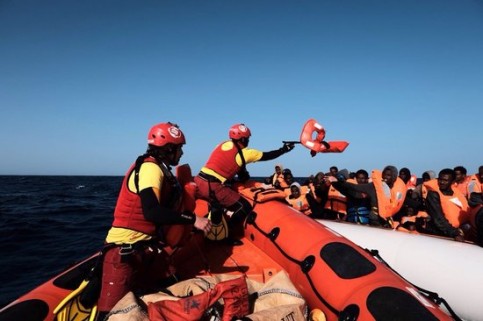 The NGO ship Open Arms has received permission to leave Barcelona, where it had been forbidden to set sail from the port for more than three months.

The search-and-rescue vessel, owned by Badalona-based charity Proactiva Open Arms, confirmed that it has been given the go-ahead from the Spanish development ministry to take humanitarian aid to the Greek islands of Samos and Lesbos.

However, the ship remains banned from taking part in migrant rescue operations in the Mediterranean Sea, as it had done from its commission in mid-2017 until Barcelona port authorities were ordered to intercept it at the start of January.

The Spanish government cited security reasons for grounding the vessel, as well as concern that there would currently be nowhere for migrants to disembark.

This came after a previous incident in which Italy and Malta refused to take in 60 people rescued off the Libyan coast despite being closest to the operation.

The breach of international convention, following Italian deputy prime minister Matteo Salvini‘s decision to close ports in his country to NGO rescue ships, caused an international outcry, with the Pope among those to have criticised the European response.

‘Keeping the ship stationary is an injustice,’ Pope Francis said in an interview with Spanish journalist Jordi Evole referring to the blockade of Open Arms vessel. ‘Why are they doing it? To let them drown?’

Pro-migration activists have staged various protests in Barcelona against the blocking of Open Arms, including draping a giant orange life jacket on the statue of 15th century colonist Christopher Columbus to highlight the loss of lives in the crossing.

Barça punish Man U to roll into Champions League semi-finals