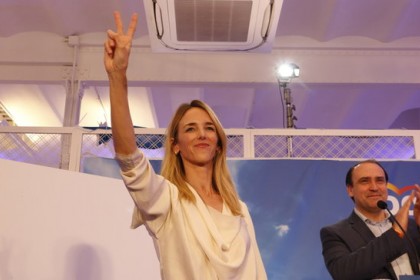 The People’s Party (PP) candidate in Catalonia, Cayetana Álvarez de Toledo, sparked a controversy with her comments on sexual consent during a Spanish TV election debate.

Álvarez de Toledo attacked the Socialist Party (PSOE) manifesto, which pledges a law stating that a sexual act will be a crime unless a woman does not give explicit consent.

‘Will you really guarantee that? Is silence for you the same as “no”? And one question: do you really say “yes, yes, yes” until the end?’ she asked her Socialist counterpart.

Her comments were sharply addressed by the Socialists’ finance minister María Jesús Montero. ‘No means no, above all for women’s consent,’ she said.

The No.2 candidate for the Esquerra Republicana (ERC) party, Gabriel Rufián, called Álvarez de Toledo’s remarks ‘very serious’ and urged her to ‘reconsider’.

‘If the right governs, we can already see what will happen. When a woman wants to abort, they will tell her, “you should have thought about it earlier”,’ she said. ‘And when you are raped, a woman like Cayetana Álvarez de Toledo will come to tell you, “well, my dear, it’s not that serious, I don’t say ‘yes’ all the time, I don’t say ‘yes’ until the end.”‘

The debate became very heated, with the People’s Party candidate hitting back at her Podemos counterpart, threatening to take legal action against her, with: ‘Are you saying that I am justifying rape?’