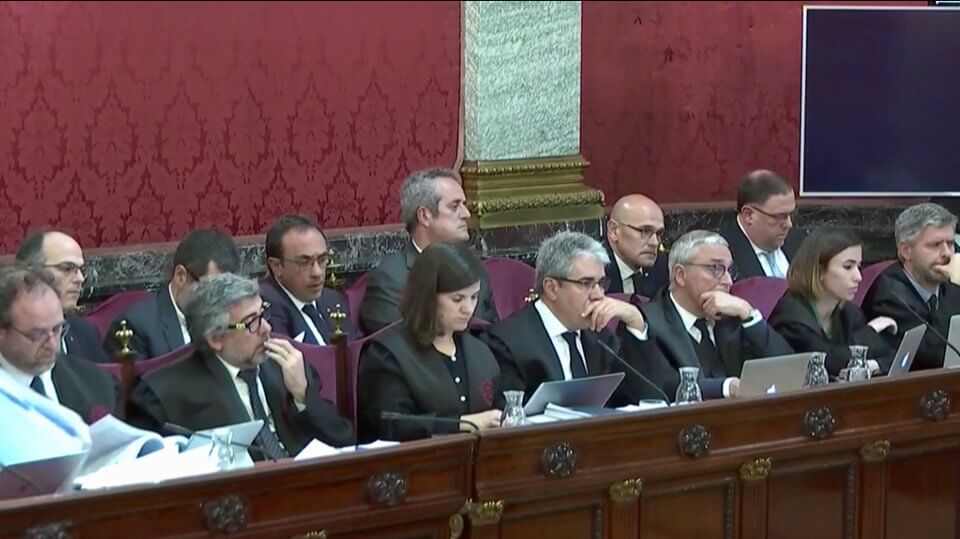 A senior Spanish police officer testifying on the 22nd day in the trial of Catalan independence leaders said the protests surrounding raids to disrupt the upcoming referendum created an ‘insurrectionary climate’ after 20 September 2017.

The high-ranking official in the Guardia Civil, and the head of its judicial police in Catalonia at the time, Daniel Baena penned one of the most consequential reports for the investigation into the so-called independence case.

Baena said the investigation into the independence movement began in 2015, with the first court inquiry launched in March 2017. After the 20 September protests, Baena said a judge saw possible grounds for sedition offences.

Despite complaints about his use of the expression from the defence, Baena insisted on referring to the peak of the independence bid (between 19 September 2017 and 28 October 2017) as an ‘insurrectionary period’.

At that time, it was ‘unquestionable’ that Catalonia had become ‘a powder keg’, Baena told the court, adding: ‘We knew that any small conflict could escalate out of control.’

‘We found out that the referendum was not their goal, but a cornerstone for a unilateral declaration of independence or to put the Spanish state in a situation of conflict,’ Baena told the court, referring to material seized in police raids.

A Moleskine diary of the former vice president’s second-in-command ‘ratified’ the police inquiry’s hypothesis, said Baena, who added that the diary said ‘the degree of conflict with the state had to be progressively increased’.

‘We investigated the development of devolved powers to create structures for a new state,’ said Baena, who added they also found how the government was preparing for independence, including issues related to ID, the tax office, borders, VAT and an ‘inventory of Spain’s assets in Catalonia’.

Courtroom president Manuel Marchena stressed that the original reports on the independence case penned by Baena didn’t have ‘any relevance’ for the current proceedings, as judges would only take into account defence teams’ and prosecutors statements.

Asked by defence lawyers, the witness stressed that the Guardia Civil police didn’t investigate politicians ‘for what they said or thought,’ but rather ‘for the crimes they might have committed.’

Lawyer Andreu Van den Eynde, representing former vice president Oriol Junqueras and former minister Raül Romeva, asked Baena if any of his clients did ever incite people to use violence in all the messages he analysed. ‘No, never,’ was Baena’s response.

Baena denied being behind the Twitter user ‘Tácito,’ who repeatedly took on the pro-independence movement and criticised journalists, politicians and Catalan police officers.

Opinion: Brexit – what now? A letter from Scotland (and Galicia)