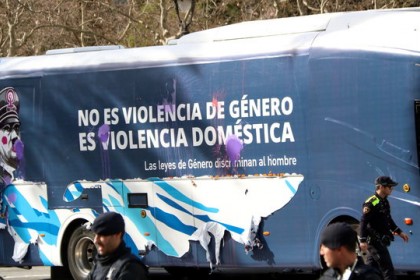 Barcelona City Council has filed two complaints against the ultra-conservative catholic Hazte Oír (Make Yourself Heard) association, that could incur fines of up to 61,000 euros.

They relate to the association’s bus, decorated with messages against gender equality laws and LGTBI norms, that circulated the city last week, campaigning against feminazis and displaying an image of Adolf Hitler with pink lipstick – on the eve of International Women’s Day.

The bus also called upon Spain’s right-wing and far-right party leaders – Pablo Casado from the People’s Party (PP), Albert Rivera from Ciudadanos (Cs) and Santiago Abascal from Vox – to repeal the 2004 gender violence law and legal protections granted to the LGBTI community.

The vehicle’s messages included: ‘It is not gender-based violence, it is domestic violence’ and ‘The gender equality law is discriminatory for men.’

The Hazte Oír bus arrived on 3 March in the Catalan capital, although it abandoned it hours later, after the Prosecutor’s Office had requested, as a precautionary measure, to immobilise the vehicle.

But the court ruled that even though the campaign’s messages may be considered ‘abhorrent and even repugnant,’ they were protected by ‘freedom of speech.’

With the lawsuits, Barcelona aims for the vehicle to be halted if it tries to enter the city again.

‘This bus is not welcome, because it is a tool for hatred, and its messages attack the dignity of women and feminism,’ said Jaume Asens, one of Barcelona city’s deputy mayors.

Whilst the vehicle was in Barcelona, it was attacked by members of a far-left youth organisation.

It is not the first time that Hazte Oír launches a controversial campaign against feminism, transgender or abortion with a bus.

‘Boys have penis, and girls have vulva, don’t let yourself be fooled,’ read one of their latest messages, which also sparked outrage.