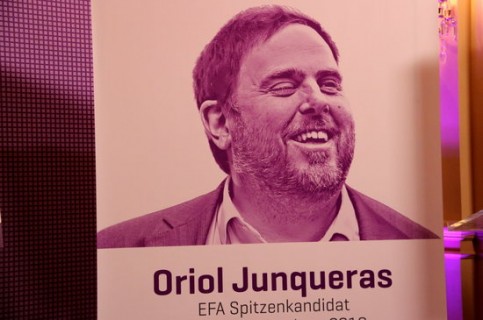 Former Catalan vice president, Oriol Junqueras, one of the pro-independence leaders now on trial in Spain’s Supreme Court, has been chosen by the European Free Alliance (EFA) as its ‘spitzenkandidat’ (lead candidate) to stand for president of the European Commission.

The EFA, a party in the European Parliament that groups together some 45 regionalist political parties, including the Esquerra Republicana (ERC) party that Junqueras heads, unanimously chose the former vice president to stand in the 26 May European election.

The group said it currently has a dozen MEPs sitting in different political groups that promote stronger rights and nationhood for regions such as Flanders in Belgium or Corsica in France.

Since 2014, the EU’s different political families have chosen their candidate for the presidency of the European Commission, known by the German term ‘spitzenkandidat’.

ERC also confirmed that Junqueras will be the party’s candidate in the Spanish general election set for 28 April 28.

It is the first time the EFA has put forward a spitzenkandidat for the elections, and the party’s president, ERC’s Jordi Solé, said that Junqueras was chosen to ‘expose the repression in Spain’ and to show ‘the regression of fundamental rights and democracy in the entire EU’.

‘If the Spanish state wants to silence him, we will give him a voice,’ said Solé, in a statement.

The leading candidates for president are Manfred Weber for the European People’s Party and Frans Timmermans for the Party of European Socialists. Also standing are Ska Keller and Bas Eickhout for the Greens and Jan Zahradil for the Alliance of Conservatives and Reformists in Europe.