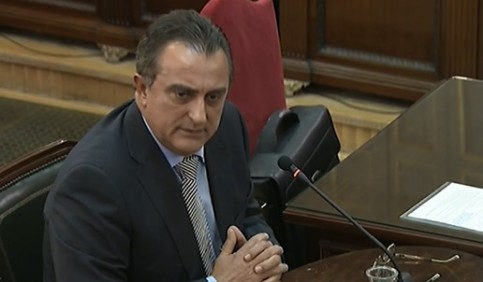 The former Spanish police leadership in Catalonia began testifying in the independence trial on Thursday 7 March, the 13th day of the trial

Sebastián Trapote, head of Spain’s National Police in Catalonia during the 1 October 2017 referendum crackdown, was the first to be cross-examined.

He said that most people Spanish police officers encountered at polling stations during the 2017 referendum showed ‘highly violent’ behaviour.

Trapote said ‘there were some vulnerable people’ present, but added that some reports said Spanish officers had to retreat ‘due to the violence’ of voters.

Trapote began his testimony saying prosecutors told officials to take appropriate steps to stop the referendum, and to ‘aid’ the Catalan police (the Mossos d’Esquadra), but also to have ‘the necessary units’ in case they had to act on their own.

Early on the day of the vote on 1 October, Trapote says he spoke to the coordinator of the operation (Diego Pérez de los Cobos), who, after speaking to the secretary of state (José Antonio Nieto), told him to enforce ‘plan B’.

That meant ‘replacing the Catalan police’ in the operation to prevent the referendum. When officers got to polling stations, Trapote said they found ‘citizens gathered outside the schools to halt the police operation.’

‘Everything was perfectly organised,’ said Trapote, who added: ‘There were calls [to attend schools], they blockaded our way, made human chains, they attacked us, pushed us … ‘

Trapote also suggested Spanish police had public safety in mind. Giving an example at a Barcelona school, he said ‘police gave up the operation’ on the grounds that ‘it could cause serious injury to both officers and the public’.

Yet he added: ‘We wanted to guarantee the collective safety, but there comes a point where this is impossible and a minimum amount of force has to be deployed.’

The official also commented on the Catalan police. Trapote said he was ‘never made aware’ of the Catalan police’s final plans, but the prosecutor let their chief know that ‘his original plan [for the 1 October referendum] was not valid.’

Ángel Gozalo, who commanded the Guardia Civil police activity in Catalonia during the 1 October 2017 referendum crackdown, also testified in the late morning on day 13 of the Catalan trial.

Former Catalan police [Mossos d’Esquadra] officers also began giving their testimony on Thursday afternoon, in what are set to be key witnesses in the trial against independence leaders.

Manuel Castellví was the information head of the Mossos d’Esquadra, when Catalan leaders called a referendum and declared independence in 2017, despite Spain’s opposition. He took to the stand to explain the role of the Catalan police during the independence bid.

Castellví told the Supreme Court that they obeyed the judicial orders to prevent the referendum from happening, and in order to comply with the law, they were given instructions to ‘mediate’ with voters to close down the polling stations where they were rallying.

He also said that he warned the Catalan government of concerns about a potential ‘escalation of violence’ on the day of the referendum.

Giving testimony, Castellví also criticised the Catalan government for thinking that the 1 October referendum would be ‘like a normal election’, and said he urged them to comply with court orders demanding the referendum be stopped.

ALSO READ: The ‘Jordis’ can now appeal to the EU Court of Human Rights

However, the former police official said that the Catalan president at the time, Carles Puigdemont, insisted that the referendum would go ahead because there was a ‘mandate from the Catalan people’ to do so.

Castellví’s testimony came after Spanish officials had appeared in court in previous days, criticising the Catalan police for not doing enough to stop the vote that had been declared illegal by the courts.

Yet the former police official told the court that 239 polling stations in Catalonia did not open their doors on the day of the referendum thanks to the work done by the Catalan police in the days leading up to the vote.

Castellví also said that the Catalan police were expecting a ‘non-violent climate’ during the referendum, and that ‘11,000 Catalan police officers were working that day, 7,850 of whom were part of the [referendum] operation’.

‘There were no riot police deployed,’ added Castellví, who explained that they were not available during the independence referendum due to ‘concerns’ over demonstrations that had been called for later that day.

Asked about why the Catalan police did not close down more voting places before 1 October, the former Mossos official said that ‘polling stations were only to be shut down ahead of the referendum if they were hosting activities related to the vote.’