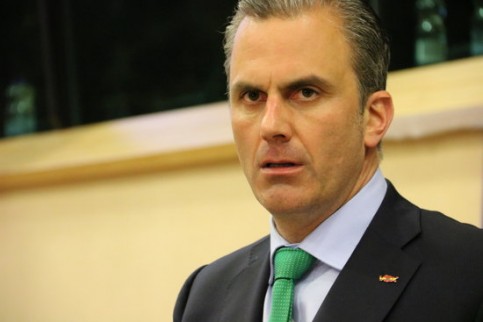 It is ‘thanks’ to Vox that 12 Catalan independence leaders are on trial in Spain’s Supreme Court, the secretary-general of the far-right party, Javier Ortega Smith, said at an event in the European Parliament on Wednesday afternoon.

Ortega Smith is also the lawyer behind the far-right party’s ‘popular prosecution’ in the Catalan independence trial.

In a conference in Brussels on the political situation in Catalonia, Ortega criticised Spanish prosecutors for their ‘inaction’ in pursuing the organisers of the independence bid in 2017, and boasted how his party managed to get accepted as a private prosecutor in the case.

ALSO READ: Leader of Vox in Lleida arrested on suspicion of sexual abuse

Once again, the far-right leader accused the Catalan government of being a ‘criminal organisation’ and the Catalan National Assembly (ANC), Òmnium Cultural and the Association of Municipalities for Independence (AMI) pro-independence groups of being totalitarian and criminal movements.

Invited to give the conference ‘Catalonia, a Spanish region‘ by Kosma Złotowski, an MEP of Poland’s right-wing Law and Justice party (PiS), currently in government in Warsaw, taking part with Ortega were Vox’s spokesman for Catalonia Jorge Buxadé, and the vice president of institutional relations in the Balearic Islands, Malena Contestí. It was attended by about 150 people.

During the conference, Vox warned that Europe was under threat from ‘globalism’ and ‘multiculturalism’ and stressed the importance of Spain’s contribution.

Ortega Smith also lauded Spain’s role in Europe, saying that ‘without [the battle of] Las Navas de Tolosa, without the Battle of Lepanto and without Charles V, I believe that all the women in this room would be wearing burqas’.

Wednesday’s conference also attracted criticism, with a feminist group made up of employees at EU institutions protesting the event under the banner: ‘Our rights are not negotiable.’

‘Europe has to be a place where everybody has their rights, we are feminists and we defend the rights of LGBT+ people,’ one protester, who wished to remain anonymous, told the media.

The group said they were ‘outraged’ that the European Parliament had authorised the Vox conference. Only a few days earlier, the EU institution had cited ‘security threats’ to cancel a similar event at which former president Carles Puigdemont was to speak

Spain gears up for protests on International Women’s Day