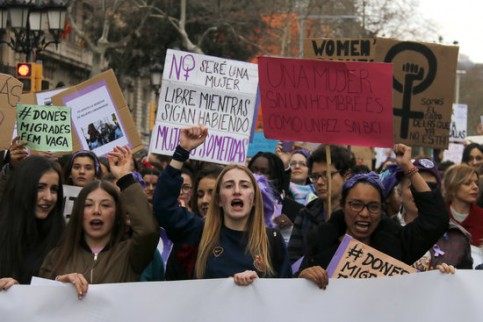 Feminists across Spain are gearing up again for International Women’s Day on 8 March, after a feminist strike last year spawned an unprecedented wave of demonstrations with major political consequences.

The consequences of last year’s protest were far-reaching, galvanizing both politicians for and against the feminist movement.

Unions, feminist associations and left-wing parties have called for a work stoppage for two hours on 8 March, aiming to recreate the strike and mass protests seen nationwide to mark the same day in 2018.

Since March last year, the ruling Socialist (PSOE) party, the right wing People’s Party (PP) and Ciudadanos (Cs) have all since raced to pledge to do their bit against gender inequality in Spain, a country with a strong feminist movement.

When he came to power in June last year, Spanish Prime MInister Pedro Sánchez even appointed 11 women and 6 men as ministers – an unprecedented record in Spain.

But virulent anti-feminism rhetoric has also made a strong entrance, with far-right party Vox and an ultra-conservative association that chartered a bus with the slogan ‘#StopFeminazis‘ coupled with a picture of Hitler wearing pink lipstick.

The bus chartered by conservative, Catholic association Hazte Oir (‘Make yourself heard’), which compares feminists to Nazis, has been driving around the country for several days.

It is protesting against a law fighting gender violence, another for gender equality and yet more for LGBT rights, arguing these all discriminate against men.

Prosecutors in Barcelona asked the bus to be stopped when it came to the Mediterranean city, charging it incites hate and discrimination, but a judge refused to do so, citing freedom of expression.

With far-right Vox party rising in polls ahead of the Spanish general election on 28 April, the rejection of feminism is seen as one of the main driving forces behind its increasing popularity, along with its tough approach on migration and the Catalan independence bid.

Vox has repeatedly described the feminist movement as ‘supremacist’ and criticised it for defending ‘gender ideology.’ The party has questioned official figures on violence against women, alleging that many men are unjustly reported by their partners.

Vox burst into Spanish politics last December with historic results in Andalusia’s election, which allowed People’s Party (PP) and Ciudadanos (Cs) to oust the Socialists (PSOE) from the regional government.

Both parties were under fire for negotiating with the far-right, but opened the door to new deals following next April’s election in Spain.

Spain’s opposition head and PP leader, Pablo Casado, ruled out attending the official march on Women’s Day this year after reading the manifesto, which he dismissed as ‘extreme left propaganda’.

In this year’s statement, strike organisers accuse ‘the right and the extreme right’ of targeting ‘women, lesbians, trans people, and especially migrants,’ with their ‘ultra-capitalist, racist, and patriarchal offensive.’

Casado was recently under fire after advocating for more restrictive abortion laws, which would only allow it in cases of rape, impairment of the fetus, and health risks for the mother.

The leader of Cs in Catalonia Inés Arrimadas has been the party’s standard-bearer of what the party describes as ‘liberal feminism’, which advocates for the legalisation of prostitution and surrogacy, among other measures.

In Catalonia, dozens of protests are expected throughout International Women’s Day, with the main rally called in Barcelona at 6:30pm. According to the local police, some 200,000 people attended the demonstration in the city last year.

‘We want to improve on last year’s success,’ said Dolores Pulido, an organiser of this year’s feminist protest in Barcelona.

Apart from temporary work stoppages and a general strike, feminist groups are calling again on women to back a strike affecting their consumption and family care tasks.

Major political figures are supporting the strike, including the mayor of Barcelona, Ada Colau.

‘The same reasons as last year remain: we continue to suffer structural violence, they continue to kill us, they rape us, attack us, and discriminate against us,’ said Colau, who stressed that politicians should let ‘the feminist movement’ take the lead and avoid using it for partisan interests.

EU event: Catalan trial is ‘thanks’ to far-right Vox