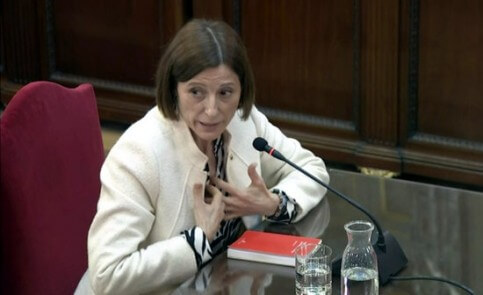 Catalan activist Jordi Cuixart defended the ‘right to vote’ in the Supreme Court today, as the third week and seventh day of the trial of Catalan independence leaders got underway in Madrid.
‘The right to vote in Catalonia is achieved by voting,’ the head of the Òmnium Cultural civic organisation told the court, adding: ‘What we did on October 1 [holding the referendum] was an exercise of collective dignity.’

Charged with rebellion, Cuixart is the 11th defendant to take the stand in the trial.

In his testimony today, Cuixart also made a defence of democracy, telling the prosecutor: ‘Criticise me for wanting a “democratic tsunami” … We want more democracy, for citizens to be heard, not only for Catalonia, but for Spain.’

‘Democratic values are above the rule of law. It is an obligation of citizens to defend them.’

Duing the cross-examination, Cuixart also said: ‘My priority is not leaving prison, but denouncing the violation of rights and freedoms in Catalonia and Spain,’ adding that ‘solving the ongoing conflict’ is also among his priorities.

The independence referendum ‘was an exercise of civil disobedience, which is not punishable with 500 days of pre-trial jail or a 17-year prison sentence,’ said Jordi Cuixart regarding the 1 October vote, suspended by Spain. ‘Civil disobedience is a tool for societies to move forward socially.’

‘All Spaniards should be proud of the October 1 referendum, the biggest exercise of civil disobedience in Europe’.

‘The pain that we feel towards the disproportionate [Spanish police] violence on October 1, 2017 will last generations,’ he added. Some 1,000 people were injured as a result of the law enforcement operation, according to the Catalan health department.

In fact, Cuixart went further, arguing that defending democracy is more important than complying with the law: ‘Democratic values are above the rule of law. It is an obligation of citizens to defend them,’ he told the court.

Alongside Jordi Sànchez, Cuixart led a protest outside the Catalan economy department on 20 September 2017, as a response to Spanish police raids of official buildings aimed at halting the organisation of the referendum.

Today, the Òmnium head defended the protests, over which he has been remanded in custody for almost 500 days, saying ‘[the September 20 raids] saw the response of any society whose institutions were being attacked.’

Cuixart added that the ‘September 20, 2017 protests were the spontaneous reaction of the people,’ and that ‘since 2010, we have been asking politicians to listen to the will of the citizens.’ He said the protests that day were peaceful.

The leader of Òmnium also expressed disagreement at some questions regarding the rally. ‘The prosecutor is questioning the right to protest.’

‘No court ever told citizens not to take part in any mobilisation,’ he added.

Cuixart was the president of the pro-independence civic organisation Òmnium during the 2017 peak of the Catalonia-Spain conflict, and he is still leading the association.

She was the last defendant to testify in the proceedings.

Forcadell has been one of the main key players in the road to independence since 2012. The first years, she was leader of a large grassroots pro-independence organisation, the Catalan National Assembly (ANC), and from 2015 as parliament speaker.

The Spanish Constitutional Court sent her several warnings and the Spanish prosecutor filed criminal lawsuits against her while in office, for allowing debates and votes on independence. Forcadell, however, repeatedly stated that she always respected freedom of speech and the rights of MPs.

‘The essence of democracy is that the words spoken in parliament have to be free, one must be able to discuss anything in the chamber,’ said Carme Forcadell, during her testimony in the Supreme Court today.

‘The only limit to freedom of speech is respect for human rights,’ she said, after being asked whether she would also have used freedom of speech as grounds for allowing a parliamentary debate on human trafficking.

‘I restricted myself to my duties,’ said the former parliament speaker

Yet, she denied any active role in the events that led to the independence referendum on 1 October 2017. ‘I didn’t take part in any strategy, I restricted myself to fulfilling my duties as parliament speaker,’ she said.

Forcadell also denied calling on citizens to occupy schools serving as polling stations for the referendum, and insisted she had no meetings with government members at the time: ‘The legislative power and the executive power had nothing to do with each other,’ she said.

She insisted: ‘It’s not within the parliament bureau’s duties to assess the constitutionality of parliamentary proposals,’ and appealing to freedom of speech, added: ‘We can’t allow censorship into the parliament.’

‘All Spaniards should be proud of the October 1 referendum, the biggest exercise of civil disobedience in Europe’.
WHY?
Only half of the population in Catalonia wants independency, it seems more like a selfish stunt to force things through, than an actual democratic interest.