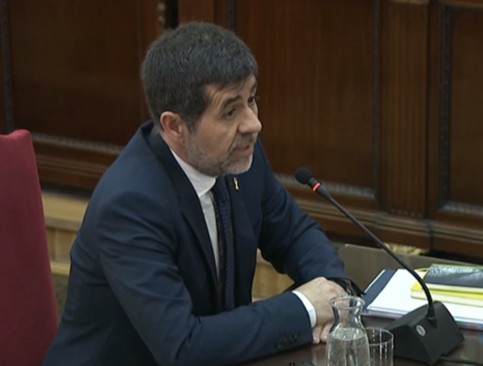 On the sixth day of the trial of the Catalan independence leaders, the former business minister, Santi Vila, said that the 2017 independence referendum became ‘a political protest’ after it was declared illegal by Spain’s Constitutional Court.

Testifying in the Supreme Court today, Vila also told prosecutors that neither he nor any of his government colleagues took any action after the referendum law making the vote possible was suspended.

Vila, who is charged with disobedience and misuse of public funds for his part in the independence bid, also hinted at differences in the government about how to handle the situation.

When Carles Puigdemont was under pressure to declare independence after the vote, Vila says he told the former Catalan president: ‘If we’re not able to emotionally deal with this, I’m stepping down.’

Asked why Puigdemont did not dismiss him, Vila replied that ‘he believed I was more useful inside than outside his government,’ adding that he hopes to resume his relationship with the former president, saying ‘I feel deep pain for his current situation.’

Unlike most of his colleagues, Vila was always skeptical of unilateral moves to achieve independence, and finally stepped down from his post a day before Catalan MPs voted to declare independence.

Vila also said he ‘regretted’ what happened in Catalonia, saying ‘it’s inappropriate for an advanced society.’

‘There were more moderate and centrist politicians in the Catalan and Spanish governments than many believe. We were committed to finding a solution to an institutional conflict that was inappropriate for modern times,’ he added.

Referring to the push for independence, Vila said: ‘Without going too far, we wanted to push things to the limit and provide a solution to a repeated, peaceful and persistent civic feeling among the public.’

Prosecutors have requested Vila serve a seven-year prison sentence and pay a €30,000 fine. During his testimony he spoke about the funding of the bid, saying: ‘My intuition is that the referendum was funded by patronage, by business people or patrons committed to the initiative.’

Pro-independence activist Jordi Sànchez began his testimony in Spain’s Supreme Court today by declaring himself to be a ‘political prisoner’.

‘This is a political trial. And all accusations by the prosecutors are false,’ added the head of the pro-independence Catalan National Assembly (ANC) civil organisation during the 2017 referendum.

Sànchez, who is facing rebellion charges and a 17 year prison request by the public prosecutor, told the court: ‘I’m convinced that I’m here today because I was the president of the Catalan National Assembly.’

Jordi Sànchez became the ANC’s head in 2015, going on to lead a protest outside the Catalan finance ministry on 20 September 2017, in response to Spanish police raids trying to hault preparations for the referendum.

He also told the court that people spontaneously started protesting the Spanish police raids and that the then-interior minister, Joaquim Forn, who is also on trial, asked him to ‘help with security and public order.’

The 20 September protests were considered by the Spanish authorities to be ‘tumultuous’, and Sànchez was charged with sedition, and then rebellion, and was remanded in custody, where he has so far remained for 492 days.

While in jail, Sànchez stepped down as ANC leader and was elected an MP for Carles Puigdemont’s JxCat candidacy. After a failed attempt to appoint him Catalan president, he was later suspended as an MP.