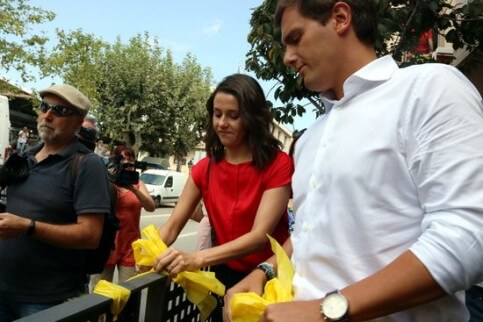 Inés Arrimadas, the leader of the Ciudadanos (Cs) party in Catalonia (Ciutadans), is to travel to Belgium on Sunday to remind the former Catalan president, Carles Puigdemont that ‘the republic doesn’t exist’.

However, sources in the Cs party have insisted that she has no intention of actually meeting with the former president while she is there.

Arrimadas announced her trip to Belgium via Twitter: ‘As Catalonia’s main party we defend all Catalans that are not for independence; we do it in parliament, in institutions, in the streets. This Sunday, we’ll also do it in Waterloo,’ she said.

Puigdemont left Catalonia in October 2017, after being sacked by Spain’s government following a declaration of independence.

Now based in Waterloo, Puigdemont is the president of the Council for the Republic, a private organisation that advocates Catalan independence.

Puigdemont had responded to Arrimadas’ original announcement in which she said would go to Waterloo to ‘tell him that he’s not the president of anything, just a runaway,’ saying that he was willing to hold a ‘cordial meeting’ with the Cs politician.

Minutes after it emerged on Friday that Arrimadas would not in fact meet with Puigdemont face-to-face, the former president asked on Twitter: ‘How does she want to talk to me, by telepathy, by megaphone?’

Arrimadas is the most prominent detractor of the independence movement in Catalonia, and a fierce critic of Puigdemont and his successor as president, Quim Torra, who has said that Puigdemont is the ‘legitimate president of Catalonia’.