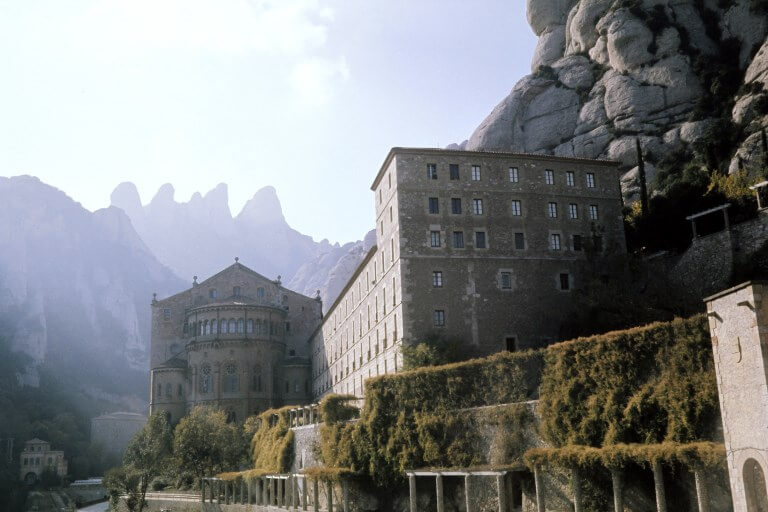 A trickle of accusations of sexual abuse against priests in schools and seminaries is starting to erode the wall of silence in Catholic Spain, whose Church representatives are set to attend a major Vatican meeting on child protection.

‘This is only the tip of the iceberg,’ warned Miguel Hurtado, who recently made his case public.

‘They’re not ready for the tsunami that is coming,’ the 36-year-old said defiantly.

For 20 years, Hurtado stayed quiet, trying to come to terms with the abuse he suffered when he joined a boy scout troup at the Santa Maria de Montserrat Abbey, which sits high up in jagged mountains northwest of Barcelona.

His alleged abuser, whom Hurtado accuses of fondling him for a year, was a charismatic monk who founded the group and died in 2008.

‘I would have reported it earlier but I was a kid and I was too scared,’ said Hurtado, who revealed his accusations in a Netflix documentary on abuse in Spain’s Church.

‘The secret was killing me and I needed to come out with the truth, whether people believed me or not.’

Since then, nine others have come out to allege they were victims of the same monk and fresh accusations have emerged in religious schools in the Basque Country, various Catalan parishes and in a college in Barcelona.

Even the football world was affected.

On Thursday, Atletico Madrid said it had parted ways with a former monk who once trained its young players after he acknowledged having sexually abused one of his students in the 1970s.

The heads of around 100 bishops’ conferences from every continent will convene from Thursday to Sunday for the Vatican meeting on the protection of minors.

‘There is a chain-reaction … It’s easy to imagine that there is a lot hidden that has not yet come out,’ says Josep Maria Tamarit, a professor in criminal law at the Catalonia Open University who is leading an investigation into the issue.

As scandals erupted in countries like the United States, Ireland or Australia, complaints in Spain were few and far between despite the Church’s loss of influence over the years, particularly with younger generations.

Hurtado believes this was down to how Spaniards deal with trauma in general.

‘For example, we have dealt with the traumas of the (1936-9) civil war and the (ensuing) dictatorship via omission,’ he says.

‘Forgiving and forgetting as it’s part of the past. Leaving it all hidden.’

Many allegations that are proved have also either gone past the time limit in which legal proceedings can be initiated or the accused have died, says Tamarit.

‘There is a lot of discouragement,’ he adds.

In 2016, one of Spain’s biggest paedophile scandals erupted at schools run by the Marist Roman Catholic community in Barcelona.

Most of the 43 complaints made against 12 teachers were shelved.

Just two teachers ended up facing charges, one of whom was sentenced and the other is awaiting trial.

It’s a similar situation in Italy, another Catholic country criticised by a recent United Nations report for ‘the numerous cases of children having been sexually abused by religious personnel … and the low number of investigations and criminal prosecutions’.

Tamarit links this to a certain Catholic mentality which sees all sexual acts as sins and therefore ‘there is not much difference between any old impure act and abuse of a minor’.

‘This meant it wasn’t made visible and there was no awareness of its importance and seriousness.’

Silence ‘has to stop’

In Spain though, the recent scandals have pushed the Spanish Church into action.

In October, it announced the creation of a commission to rework its protocol on abuse after being accused of covering up cases by the El Pais daily.

‘There has been a kind of silence and the Church has taken part in this silence, which was also a part of society,’ says Norbert Miracle, spokesman for the bishops’ conference in Catalonia and neighbouring Valencia and Andorra.

The justice ministry has also asked prosecutors and religious authorities for a report on all cases of abuse.

In December, it unveiled a new draft bill for child protection that wants the time frame within which legal proceedings can be initiated to start when the victim turns 30 rather than 18 as is the case now, giving victims more time to make their complaints.

But Infancia Robada (Stolen Childhood), the first such victims association created in January, is asking for this time frame to start when the victim turns 50.

‘In most recent cases, this time frame wouldn’t have been of any use,’ says founder Juan Cuatrecasas.